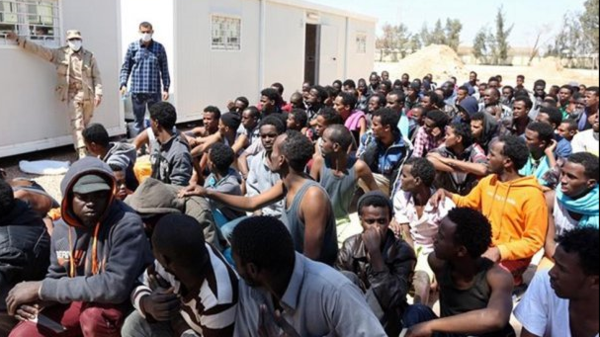 Hundreds of African refugees are being bought and sold in “slave markets” across Libya every week, a human trafficker has told Al Jazeera, with many of them held for ransom or forced into prostitution and sexual exploitation to pay their captors and smugglers.

Many of them ended up being murdered by their smugglers in the open desert or die from thirst or car accidents in the vast Libyan desert, said Salman*, the human trafficker.

A morgue in the southern city of Sabha – an entry point for many refugees coming from Africa – is overflowing with corpses, with faulty refrigerator making the situation worse, according to a Libyan health official.

The official in Sabha, 650km south of the capital Tripoli, described horrendous scenes of bodies dumped in threes, fives or more at the gates of the Sebha health facility by smugglers.

The refugees who died are never identified and many ended being buried without names or proper graves, he said.

The health official, who declined to give his name for security reasons, said Sabha’s morgue has only one dysfunctional refrigerator that can hold bodies for up to three days but end up keeping them for months and on.

“Bodies end up being decomposed inside the refrigerator and often give off foul stench.

“We appealed to the World Health Organization to help us with a new refrigerator but we have yet to receive a positive response from them,” he told Al Jazeera.

The refugees and migrants – most of them from Ghana, Nigeria, Cameroon, Zambia, Senegal, Gambia and Sudan – are smuggled into Libya by a network of criminal gangs on the promise of reaching Europe’s shores.

Libya is the main gateway for people attempting to reach Europe by sea, with more than 150,000 people making the deadly crossing in each of the past three years.

The International Organization for Migration (IOM) said on Tuesday that it had interviewed migrants from west African countries who recounted being traded in garages and car parks in Sabha.

The IOM said it had spoken to one Senegalese migrant, who was held in a private house in Sabha along with some 100 others. They were beaten up and forced to call their families to arrange money for their release. The unnamed migrant was then bought by another Libyan, who set a new price for his release.

Salman, the human trafficker, explained in detail his routes through Libya, telling Al Jazeera by phone that his “business” had increased several fold since the fall of long-time Libyan leader Muammar Gaddafi.

He said the refugees are first introduced to the traffickers by private labour offices in the cities of Agadez and Zinder in neighbouring Niger.

Salman said once he receives a wire transfer for the refugees from a “commander” in Niger, he starts the transportation process.

He said he charges between 1,000 Libyan dinars ($735) and 1,500 Libyan dinars ($1,100) per person, and once he receives payment, the migrants are loaded up on battered 4×4 vehicles and driven through Libya’s sweltering desert, where temperatures exceed 50C during the summer season.

“I pick up migrants from al-Qatron [in Libya] and transport them to Sabha,” he told Al Jazeera.

“This is a deal agreed upon with other commanders in Niger and other African countries.”

Al-Qatron, a small town about 300km south of Sabha and close to the Nigerien border, is the starting point for many of the thousands of migrants that enter Libya every year.

Once in Sabha, the refugees are taken under the control of a “commander” who provides them food, shelter and protection, before they are sold as slaves to other smuggling rings or other commanders in various Libyan cities.

The refugees are forced to live in either open courtyards, or in ramshackle rooms without proper sanitation.

Ahmad*, a resident of Sabha, told al Jazeera that forced prostitution was widespread in the town.

“The Abdel Kafi neighbourhood is one of the main squares where the prostitution rings exist,” Ahmad told Al Jazeera by phone.

He added that people were being auctioned off in the town, with men and women fetching 1,000 Libyan dinars ($735). Others from Ghana and Cameroon might fetch several thousand Libyan dinars.

“Libyans don’t have a problem with African migrants,” Ahmad said, adding that in recent years Sabha had seen an influx from countries such as Ghana, Cameroon, Nigeria and Zambia, along with Chad and Niger.

Mohamad Hasan, a Libyan national and a resident of Sebha, told Al Jazeera by phone that he witnessed five women being sold by one commander to another who immediately forced them into prostitution.

“I have seen African women being ordered to work in private night clubs that cater to the migrant communities in Libya and are forced into prostitution,” he said.

Hasan, who owns a restaurant frequented by migrants, said, the “women in particular are helpless and for the most part are stuck in Libya with nowhere to go”.

Al Jazeera could not independently verify the accounts.