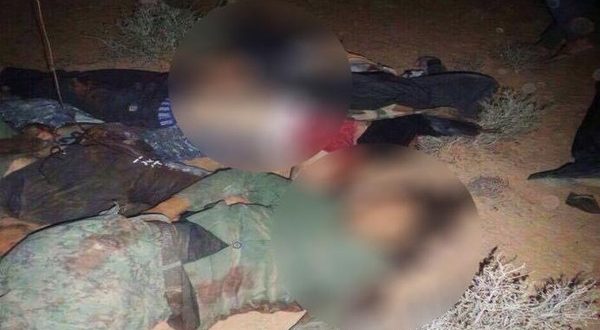 Human Rights Watch on Wednesday condemned a series of summary executions of dozens of people in areas of eastern Libya under the control of controversial strongman Field Marshal Khalifa Haftar.

The New York-based watchdog called on Haftar’s Libyan National Army (LNA) to make good on a promise to investigate the latest killings and to hand over a suspect wanted by the International Criminal Court (ICC) in connection with previous executions.

Police discovered the bodies of 36 men, all of them executed near Al-Abyar, 50 kilometres east of Libya’s second city Benghazi, on 26 October.

Two days later, Haftar ordered the military prosecutor to investigate but no findings have been announced and no suspects have been detained.

“The LNA will be condoning apparent war crimes if their pledge to investigate the gruesome discovery in Al-Abyar proves to be another empty promise,” he added.

A local security official told AFP at the time that the bodies found in Al-Abyar belonged to suspected jihadists, 19 of them foreigners.

Human Rights Watch said it had reviewed multiple lists containing a total of 25 names of men found at Al-Abyar, but could not verify which were civilians and which, if any, were fighters affiliated with forces opposing the LNA.

However, it cited relatives of six of the dead as saying that they were civilians who had been taken from their homes by armed men in front of family members.

The Al-Abyar killings were the latest in a series of summary executions in areas of eastern Libya under Haftar’s control over the past two years.

In August, ICC judges issued an arrest warrant for Mahmoud Mustafa Busayf Al-Werfalli, a commander of the the Benghazi-based Al-Saiqa brigade, on suspicion of involvement in war crimes including executions of 33 people.

Werfalli is accused of having ordered or personally carried out seven executions between March and July this year and in June 2016 that were filmed and posted to social media sites.

The LNA has said Werfalli is already in custody and will be tried by a military tribunal.

Libya has been wracked by lawlessness ever since the NATO-backed overthrow of long-time dictator Muammar Gaddafi in 2011.

It has two rival administrations – a UN-backed government based in the capital Tripoli and a rival one backed by Haftar in the east.