Home / Normal / Through the strains: a viable roadmap for Libya? 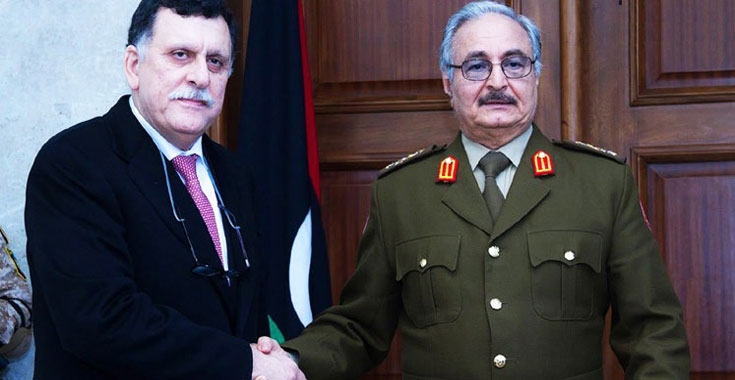 Through the strains: a viable roadmap for Libya?

Six years after Qaddafi’s death, the Libyan crisis has not been solved. The country continues to be divided between a parliament (and executive) in Tobruk and a Presidential Council (headed by Fayez al-Serraj) in Tripoli that is backed by the United Nations.

In actual fact, neither have real governing capacity but they are rather ”hostages” of the militias that support them and control the territory: General Haftar’s in Cyrenaica and the associated militias of Misrata and Tripoli to the west, respectively. The militias who fought against Qaddafi developed diverging interests and found value in entrenching their control over cities and local villages. This led to a fragmentation of authority, the proliferation of militias, criminal organisations, and terrorist groups, which undermined any attempt to bring stability back to the country. Inevitably, the rivalry among the various factions dragged a series of external actors into the politics of Libya, which turned the country’s conflict into a proxy war.

The rivalry between domestic factions and their international supporters reached its climax in the summer of 2014, when the country was de facto split into two parts, one in Tobruk in the east under the control of General Khalifa Haftar and the newly elected House of Representatives (HoR), and one in the west led by Islamist/revolutionary leaning militia leaders and those in the city of Misrata. While in most cases the factional rivalries in Libya have real roots, they have been exacerbated by the interests of foreign actors. The United Nations and the European Union as collective organisations sought to reach a negotiated solution to the civil war, which culminated in the signing of the UN-sponsored Political Agreement (LPA) in Skhirat, Morocco, in December 2015. The LPA formed a Presidency Council (PC) and a cabinet, the Government of National Accord (GNA), led by Prime Minister Fayez al-Serraj. Despite major efforts at bolstering the PC/GNA, more often than not the United Nations and the European Union were undermined by the double-crossing of some of their members. In fact, while almost all states formally pledged allegiance to the UN-led process, many behaved differently on the ground.

However, over the last two years, the LPA has failed to take off and the weakness of the unity government is a result of the failure of UN leadership. The new UN Special Envoy Ghassan Salame is trying to restore the credibility and effectiveness of the UN Support Mission in Libya (UNSMIL), first of all by amending the LPA. But a positive outcome is far from certain. The fragmentation of European actors in Libya, combined with the lack of interest expressed by the US administration in engaging in political efforts to stabilise Libya, have led to an imbalance in favor of Haftar. A series of meetings in Abu Dhabi, Paris and Rome have allowed Haftar to be formally equal to al-Serraj. Haftar has been able to gain a political role and the legitimacy it requires by presenting himself as the leader in the fight against Islamic terrorism and the emergence of radical groups in Libya. Haftar gathered around himself various groups concerned by the rise of radicals in the country. His narrative leveraged the fight against ”Islamists” in his attempt to join the international campaign against IS and radicals in the region. Haftar appeared capable of coagulating around himself the consensus of the population, fearful of an extremist trend, especially in the city of Benghazi, and of countering the proselytism of the most radical groups. On the other hand, this attitude fostered a tactical convergence between radical militias and various political Islamist forces which, despite lacking ideological affinities, felt openly threatened.

However, it would be incorrect to reduce the country’s problems to the confrontation between Haftar and al-Serraj, as a number of other factors are currently affecting the Libyan scenario. In a context of evolving and transforming alliances between the various factions, it is unlikely that a single faction could militarily prevail over the others and unify the country under its control. Similarly, despite the system of alliances that allowed Fayez al-Serraj to become President, the PC does not seem to be in a position to fully control even the Tripolitania region in which it is based. A number of militias in Tripolitania appear more and more to be acting independently from the PC, even though they are formally part of it. Other important forces in Libya hold different and at times unpredictable positions. In the south, political and ethnic fragmentation dominates. The historical tribal order was overturned and the Qadhafa tribe, which led the region under Qaddafi’s regime, suddenly left the door open to other groups. The disruption of the political and tribal order has generated repeated waves of conflict among Tebu, Awlad Sulaiman, Warfalla, and Tuareg tribes, all vying to control illicit trafficking. Tripoli authorities have sought to provide assistance, most significantly using Misrata’s militias as a pacifying element but they have not succeeded, and the Fezzan region today is characterised by increasing fragmentation.

It has now become clear that the interests and operations of regional and international actors in Libya have become complex and pervasive at the same time. Upon closer inspection of these dynamics, it would appear that only coordinated action by the international community to insulate the country from competing regional interests in Libya’s internal affairs would provide a chance to successfully reestablish order.

Internally international actors should promote and facilitate local dialogue. Discussions should concern the political recognition and inclusion of the leaderships of certain armed groups, trying to make them aware of their responsibilities, as well as those of the tribal communities they belong to, especially those with a history of marginalization. Mediation could be intensified on the levels of civil society, local representatives, and economic elites; nevertheless new negotiations involving especially key security actors are crucial. International community should collaborate with the local militias that are willing to support a new government produced by a revised LPA, and ultimately be incorporated into a professional, nascent armed Libyan force. Presidential Council should be encouraged to adopt a policy to selectively allocate funding to the militias, in an attempt to establish a closer connection between financial support and the internal reintegration of the new national powers. The international community can also engage in training the Presidential Guard and other security forces on the ground. These efforts should be undertaken within a theoretical framework for a decentralization process that shifts functions and duties of the state from the centre to the periphery. For the purpose of gaining greater influence and legitimacy, local representatives could facilitate seeking solutions in exchange for an increase in income deriving from renewed oil production.

In parallel, the international community should strengthen the Presidential Council’s (and new unity government) capacity to address the economic issues on the table (e.g. the banking liquidity, electricity and health care). The stabilization of the whole of Libya should start from the local level and move from the bottom-up. The establishment of a minimum level of security in the city of Tripoli, which by itself comprises almost a third of the population of Libya, could allow the PC/GNA to initiate a series of economic projects to repair Tripoli’s infrastructure such as restoring roads, rebuilding schools and hospitals that have been badly damaged by war and neglect, and repairing the power grid and electrical infrastructure and restart economic activity in the city. Success in these endeavors could slowly and progressively, but consistently, be expanded throughout the entire country. Success in Tripoli could be replicated in every city and village in Libya, where local militias would join municipal security forces under the supervision of the central government and the support of the reconstituted national armed forces.

The success of this plan means the setting of a deterrent against Haftar’s and others’ ambitions to weaken the PC/GNA and pursue a military victory. It also entails rebuilding support among western militias, including those from Misrata, for the PC/GNA. In order to avoid further escalation, these militias would need to be convinced that a negotiated settlement, even one that would bring Haftar into the fold would not threaten their interests.