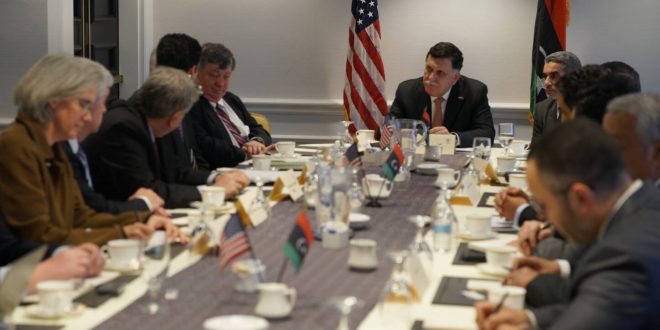 The head of the Government of National Accord (GNA), Faiz Al-Saraj received at his residence in Washington, DC, a number of non-governmental American orginizations officials specialized in the field of elections.

Al-Saraj outlined developments in the political scene in Libya and the initiative he presented last June, which “set a political course that unifies the state institutions and leads to presidential and parliamentary elections next year” according to a statement by the GNA media office posted on Facebook.

In addition, The head of the GNA said that his government had already begun, in coordination with The National Elections Commission in Libya , to prepare for the electoral phase, which requires technical matters that need to be completed, suggesting that “international expertise might be required”.

The American delegation welcomed the proposal made by Al-Saraj and expressed their “readiness to provide support in this direction”, offering to assist The National Elections Commission in Libya and to train electoral workers.

The American Ambassador to Libya, Mr. Peter Bodi was present at the meeting as well as, the Deputy Assistant Director of the Middle East Office of the US Agency for International Development (USAID) Bruce Abrams, International Republican Institute (IRI) President Daniel Twining, National Democratic Institute (NDI) Chairman Kenneth Wollack , International Foundation of Electoral System(IFES) President and Director Bill Sweeney, President and Executive Director of the International Science Organization Elisabeth Andreso ,in addition to the Libyan Foreign Minister Mohammed Sayla, Minister of Planning, Taher Alghemi, political adviser to the Head of the GNA, Tahir Al-Sunni and the Libyan ambassador to the US Wafa Bugahgies.