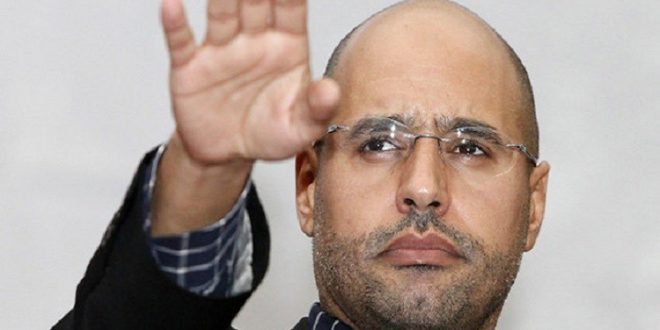 Saif Al-Islam Gaddafi is aiming at making a return with a military operation that will start around Tripoli using the forces that controlled Sabratha city earlier and loyalists to his father as well as tribal forces who back him up in the country, reported The Guardian on Wednesday.

“In recent weeks Saif has told a longstanding US contact he was gathering a force that had taken control of the coastal town of Sabratha – and claimed he would fight his way to Tripoli.” The Guardian explained.

The British newspaper indicated that observers say Gaddafi could still emerge as a political force if elections are held next year and he is allowed to stand despite his 2011 indictment from the International Criminal Court (ICC) for alleged crimes against humanity.” The Guardian reported.

Saif is wanted by the ICC for war crimes and crimes against humanity and he is sentenced to death by firing squad in absentia in Tripoli.

The Guardian quoted a diplomat involved in election preparations as saying that the ICC indictment against Saif Gaddafi would not necessarily stop him from standing, or winning.