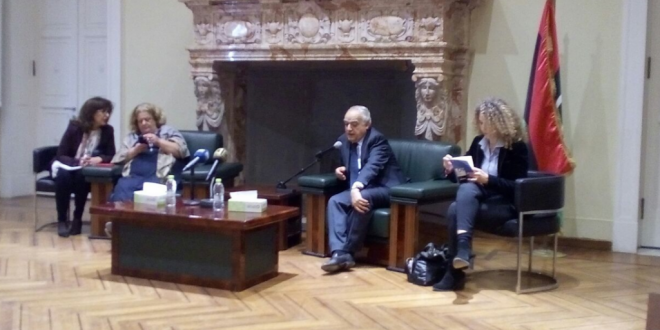 Transitional period must finish by end of 2018, says Salamé

Libya’s transitional period must be completed before the end of 2018, UN envoy to Libya Ghassan Salamé has said. Speaking at a question-and-answer session with Libyan journalists at the old royal palace in Tripoli today, he said that he had come to Libya to share in building institutions.

He added that amending the Libyan Political Agreement (LPA) was the only way to bring about a government that could serve Libyans during the rest of the transitional period next year.

“The importance of amending the political agreement is restricted to birthing a government that we can cooperate with in order to quickly serve Libyans ,” he told the assembled media.

“We’ve reached an advanced stage in making a deal between the House of Representatives (HoR) and State Council (SC),” he said in response to a question from the Libya Herald about whether the two bodies’ dialogue teams would agree amendments to the LPA. But both, he added, had held off making the final decisions. He blamed that on pressure being put on them from elsewhere.

As to the proposed elections, Salamé emphasised that there were technical, legislative and security requirements that had to be in place beforehand in order for polling to be possible.

“I met with the head of High National Electoral Council (HNEC) Emad Al-Sayeh this morning and I emphasised the importance of increasing the number of voters. The number of registered voters is less than a million and half while the real number of potential voters exceeds four and a half million,” he said.

“We have large gap”, he added, and it required much work to done. “We must have elections that can represents as many Libyans as possible and this needs HNEC systems to be upgraded,” he said.

There will have to be legislation for the polls to take place, he also noted. “As with the former elections, the new one needs to be legalised.”

As to security, there had to be a certain minimum to allow elections to occur.

“There are many people providing scenarios as to what happens on 17 December,” Salamé said, answering a question about what would happen after that date.

(The LPA set itself and the institutions legitimised by it, the Presidency council and the government of national accord, a time limit of two years. Given that the agreement was signed in Skhirat on 17 December 2015, there is a view that their expiry date is on 17 December this year. The UN and almost all of the international community, however, take the view that the clock has not started ticking because the HoR has not yet authorised the agreement.)

“In summary, we are working hard to reach to the final phase of the transitional period which must be ten months ahead from now,” Salamé stressed.

“We don’t need any vacuum or disruption or new troubles. This is what I have made clear to the UN Security Council. We have to work on finding a way to form a government that would serve the people’s needs and pave the way for elections as that will synchronise with efforts for more important things, such as constitution and building institutions,” he explained.

Continuing his wide-range survey of issues affecting the country, Salamé said that he had been following the situation in Libya in the recent years but had studied it more when asked to take over the UNSMIL post. But he had been shocked to see Libyans striving for basic needs. “Libya is a rich country which used spend million of dollars a year to build schools and hospitals in different African countries,” he said.

“What’s happening now is a tremendous amount of robbery and looting in Libya by Libyans themselves, and others. I have served in many countries and I have seen corruption, but what’s happening in Libya at the moment has gone way beyond that, to something else far more horrible”.