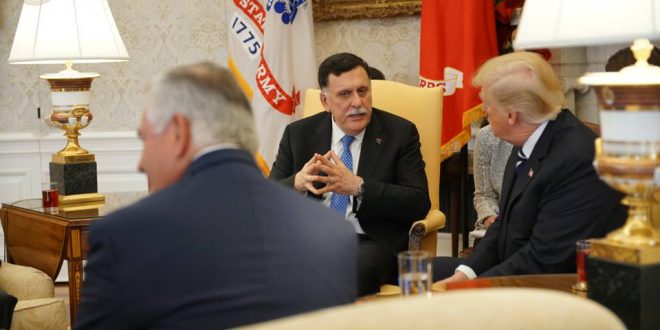 Chairman of Presidential Council, Fayaz Sarraj, has reportedly requested the United States to play a more active role in Libya and to protect his government in Tripoli.

The Guardian quoted a US source as saying that Sarraj and his delegation “wanted a military guarantee from the United States that we would basically defend their block in Tripoli.”

According to the Guardian, Sarraj’s request, which was made during his visit to the USA, was rejected.

The US source attributed the rejection to the deep misgivings about corruption in the government of Presidential Council and the human rights record of the armed groups protecting it.

The political adviser to Fayaz Sarraj, Taher Sunni, has denied the Guardian’s report and confirmed in a tweet on Wednesday that the newspaper has no factual basis.

“The meeting with President Trump touched on issues of counter-terrorism and the expansion of security and military capabilities within Libya. He explained, calling on the Guardian to confirm their story with the White House.

Sunni described the meeting of Sarraj with US President Donald Trump, at the White House last Friday, as fruitful.