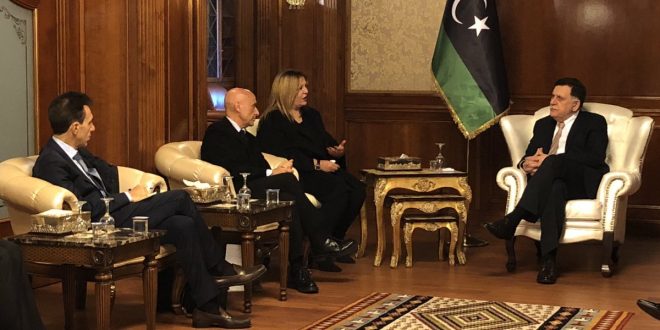 The operation room is to consist of representatives of appropriate institutions in both countries, including the Coast Guard, the Illegal Immigration Control agency, the Attorney General, and the Intelligence Agency.

This agreement came during the meeting between both officials at the headquarters of the Presidential Council in Tripoli this morning.

Minniti also commended the important steps took by the Libyan side to deport large numbers of migrants voluntarily to their countries of origin, expressing his gratitude for the coordination between the Libyan and Italian authorities in this regard, and his country’s willingness to support the Libyan Coast Guard’s efforts in its various tasks.

According to the Information Office of the Presidential Council, Sarraj told the Italian Minister that the number of illegal immigrants outside the shelters remains significant and more cooperation is needed especially in the southern borders of Libya which the migrants use to enter Libya.

The meeting, which was attended by Interior Minister of Presidential Council, Aref Khoja, the Coast Guard Commander, Brigadier General Abdullah Toumieh, and the Italian Ambassador to Libya Giuseppe Perrone, discussed the measures and steps needed to be taken to confront smuggling and human trafficking networks. They agreed to increase their focus on pursuing these networks in Libya, Africa and Europe.

The meeting reviewed the various international contributions in terms of securing the southern borders. Minniti also expressed the commitment of the Central European countries to contribute to this process by providing 35 million euros next week to protect the borders.

The meeting also came over the spatial development and support Libyan municipalities, which had been affected by the phenomenon of illegal immigration.