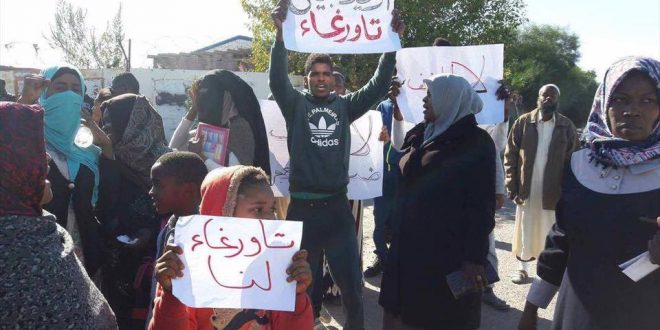 Dozens of exiled Tawerghans demonstrated in Tripoli’s Falah district today protesting over their squalid living conditions and demanding the Presidency Council and the international community organise their return to their home town.

One of the main camps housing the homeless Tawerghans in in Falah. Three days ago there were reports of a serious fire there, thught to hav been started when people lit fires to keep themselves warm in the cold weather.

Today’s protests took place as the deputy head of the Tawergha local council, Salim Omeish, had a meeting with Faiez Serraj the head of the Presidential Council (PC) at the prime ministry building in Tripoli.

There was no PC agreement to a return, although Sarraj did agree to improve conditions at the Falah camp. According to a PC statement, he ordered immediate maintenance work at the camp and the provision of urgent humanitarian assistance. He also asked the Tawergha council to coordinate with GECOL to ensure there was an adequate supply of power to the camp.

The statement also said that Serraj said that “important steps” had been taken to reduce the suffering of the Tawerghans and that, as a result, the process of returning to Tawergha weould start “before the end of this year”.

He did not say what measures had been taken that would allow Tawerghans to start returning in just three week’s time.