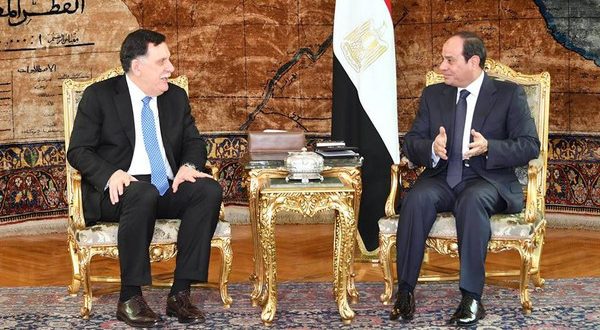 Egyptian President Abdul Fateh El-Sisi has called on all Libyans to ignore their own narrow interests and to instead work towards a unified, stable Libya. He made the call during talks today with Presidency Council head Faiez Serraj.

For his part, Serraj who flew from Tripoli last night, updated Sisi on the latest UN efforts to address the on-going political stalemate, the spokesman of the Egyptian President, Bassam Radi said. In the hour-long meeting, according to a Presidency Council statement. Serraj also said he hoped to draw from the “successful” election experience that Egypt had undergone,

Cairo has been hosting talks in an effort to unify Libya’s various military bodies. According to Radi, Serraj thanked Sisi for this.

The Egyptian President has on many occasions stressed that a political solution remains the only the way forward in Libya and he again underlined this point of view today. He also warned of the growing threat from so-called Islamic State fighters fleeing Iraq and Syria to Libya and Egypt.

Serraj’s subsequent meeting with Egyptian foreign minister Sameh Shoukry covered much of the same ground with an agreement that both sides would hold similar talks more frequently as Libya supposedly heads towards elections.

There have been reports that Serraj would meet Khalifa Hafter while In Cairo but this has not happened so far.

Yesterday, an array of Libyan military leaders from the east and the west of the country were in Cairo in for the fourth round of talks to bring about a unified army.

Libyan National Army spokesman Ahmed Mismari, one of those taking part, said “we have made excellent understanding to reactivate the military establishment.”

“The Cairo meetings demonstrate the ability of the Libyan armed forces to confront the current crisis,” he added. Mismari was insistent that, while he supported the current political process, it was still vital that efforts to unify and strengthen the army were carried on regardless of it.