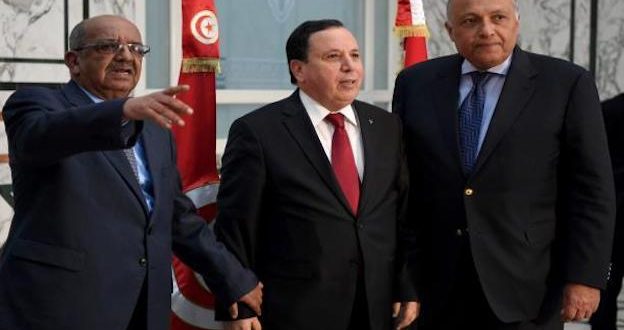 The meeting of the neighbouring countries of Libya, Egypt, Tunisia, and Algeria, started in Tunis, on Sunday. The meeting was attended by the Egyptian Foreign Minister, Sameh Shoukri and his Tunisian and Algerian counterparts, Khamis Al-Jhenawi and Abdul-Qader Messahel.

From his side, the special envoy of the Arab League, Salah Al-Jamali, said that the meeting stresses that the Political Agreement is still valid.

Al-Jamali stated, in a press release, that the 17th December doesn’t mean the end of the validity of the Political Agreement and the creating a political vacuum in Libya.

On the other side, the commander of the Dignity Operation, General Khalifa Haftar, announced, on Sunday, the end of the Political Agreement and its political bodies, mainly, the Presidential Council (PC) that led by Fayez Al-Sarraj.

In the same context, Al-Sarraj visited Algeria, on Sunday, calling for making pressure on the regional countries including Egypt who tries to obstruct the political settlement in Libya. He also called for helping Libya in holding the general elections.

A source from Algeria said that Al-Sarraj called the Algerian officials to ask Egypt to stop direct supporting Haftar, stressing that the continuity of the kind of support could destroy the efforts of the United Nations in implementing the action plan of the UN envoy to Libya, Ghassan Salame.

The source clarified that Al-Sarraj said that some regional countries are trying to confuse the settlement path and the efforts of the UN by preventing the general elections.