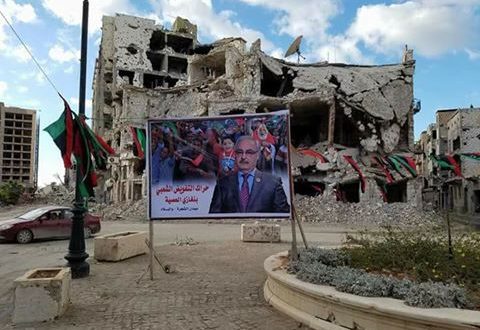 Thousands of supporters of military strongman Khalifa Haftar rallied in several major cities across Libya on Sunday calling on him to take charge of the country following the expiration of a two-year mandate for the UN-backed government based in Tripoli.

The UN-brokered agreement signed in Morocco on 17 December 2015 established Libya’s Government of National Accord (GNA) for a one-year period, renewable only once.
Despite that deal, Libya has remained divided between the GNA government in Tripoli led by Prime Minister Fayez al-Sarraj and a rival administration backed by Haftar in the east.
At the rallies in Benghazi, Tobruk and Tripoli supporters called on Haftar to become the country’s ruler to fill the political void.
Haftar did not explicitly call on his supporters to take to the streets but such rallies in the past have been organised rather than spontaneous.
The Gaddafi-era general had earlier offered the strongest indication yet that he intends to run for president if elections are held next year, saying he would only answer to “the will of the Libyan people”.
In a televised speech, Haftar – who has never recognised the GNA’s authority – said the “expiry of the Libyan political accord” marked a “historic and dangerous turning point”.

The head of the eastern-based internationally recognised parliament Agila Saleh later on Sunday called for parliamentary and presidential elections to be held in 2018, likely in response to Haftar’s remarks.

“I call upon the Libyan people to participate in the upcoming parliamentary and presidential elections,” he said in a TV broadcast.

“It is the only way to peacefully and democratically transfer power.”

The UN said on Sunday that it was “intensively trying to establish the proper political, legislative and security conditions for elections to be held before the end of 2018”.

Libya has been wracked by lawlessness ever since the NATO-backed overthrow of long-time dictator Muammar Gaddafi in 2011.

Through military success, Haftar has marked himself as a key player in Libya, having also received backing from Egypt, the UAE and tacit support from Russia.

Rights groups, however, have accused his forces, the Libyan National Army (LNA), of committing dozens of extrajudicial executions which could amount to war crimes.