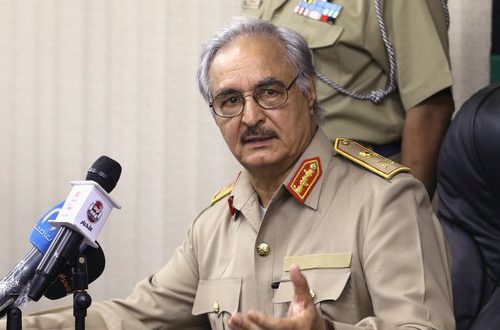 “Libyan National Army leadership, headed by commander Khalifa Haftar will not seek the presidency in the upcoming elections, instead they are in search of civilian leadership who can provide stability and security in Libya,” said Mesmari when speaking to Libyan newspaper Al-Marsad.

On Sunday, Haftar announced the end of the Libyan Skhirat Agreement and said he does not recognize any decisions issued by the political bodies linked to it, in reference to the Government of National Accord (GNA).

“The discussion between Italian Minister of Foreign Affairs Angelino Alfano and Chairman of the Presidential Council of Libya Faiez Mustafa Serraj confirmed that a military solution in Libya is not an option,” said Libyan Foreign Ministry Spokesperson Mohamed Siala.

“The solution in Libya is political; building on the efforts of the U.N. and its envoy to Libya Ghassan Salame as well as the technical preparation for the election,” added Siala, describing the visit as “fruitful and productive”.

Chairman of the Presidential Council of Libya announced that the country will hold its presidential and legislative elections in March 2018. He also called for all Libyans to unite in order to re-build their state.

Since the overthrow of Muammar Gaddafi in 2011, many armed entities have fought to gain control over Libya. The country is currently in a power struggle between the internationally recognized government of Al-Wefaq (Political Party) in Tripoli and the “interim government”, supported by Haftar’s forces.