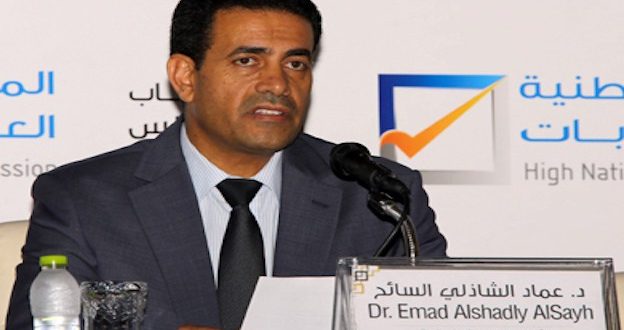 Emad al-Sayh, the Chairman of the Libyan Electoral Commission, speaks during a press conference on the last developments related to the general election on June 26, 2014, in the capital Tripoli. The count was under way in a Libyan general election overshadowed by deadly violence in second city Benghazi, including the killing of a leading women's rights activist. AFP PHOTO / MAHMUD TURKIA

The head of the High National Elections Commission (HNEC), Emad Al-Sayeh, revealed, on Tuesday, that number of the voters that already registered by Monday reached 1061959 voters.

Al-Sayeh clarified, in his press release, that the HNEC is updating the voter register after three years delay, adding that opening the registration is one of the duties of the HNEC.

Al-Sayeh said that the electoral operation would start as soon as the House of Representatives (HoR) submits the elections’ laws. He pointed that various parts of the Libya society are waiting for the HoR to do it job.

In the same context, Al-Sayeh stressed that the HNEC wouldn’t exclude any Libyan party. He added that all Libyans have the right to participate in the elections but any participant should the national number.

Al-Sayeh stated that even the followers and supporters of Gaddafi’s regime have the right to participate in the elections.

It is worth mentioning that the HNEC announced on 6th December opening the doors for the registration for all Libyan citizens to get ready for the general elections in the coming year.