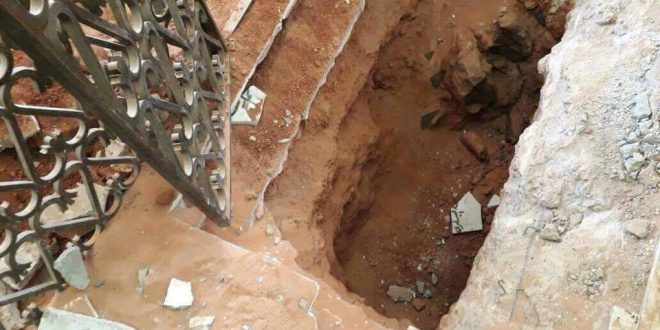 A Salafist battalion affiliated with the Dignity Operation forces that led by General Khalifa Haftar had exhumed and destroyed the shrine of the Imam Al-Mahdi Senussi in the city of Al-Kufra, south-east Libya.

Sources from Al-Kufra said that 40 elements from the Salafist battalion who follow the Saudi Sheikh, Rabee Al-Madkhali, had attacked the shrine and transferred the body to an unknown place.

The member of Senussi family, Nasser Safi Addeen Senussi, said on his Facebook page that exhuming shrines had occurred in the time of Muammar Gaddafi’s regime. Gaddafi’s regime issued a decision in November 1884 to exhume the graves of the Senussi family in Al-Jaghboub city and abused the bodies.

He added that what happened in Al-Kufra wasn’t a surprise for him because the culture of destroying and abusing the graves inherited from the time of Gaddafi. He said that the other reason is the ignorance and the hatred always guided the criminals to attack this kind of symbols.

Observers expect the Senussi family to sue Haftar’s forces, raising a question about the possibility of witnessing disputes between the Madkhali Salafists and the callers for returning the monarchy system in Libya.

Intellectuals said that what happened is forbidden in Islamic law because it is an unaccepted crime, especially when the abused is the shrine of Imam Al-Mahdi.

The intellectuals added that it is not true that these shrines are worshipped, it is not more than honouring the symbols of the Libyan builders who taught the Libyans their religion and built part of the civilisation in the country.

The activist, Zahra Langi, said that Al-Madkhali followers are not a new phenomenon because Gaddafi had supported them in his times to have them as his supporters as they believe in obeying the rulers even if they are dictators like Gaddafi.

Langi hadn’t expected any movements from the Senussi family against the ones who had attacked the shrine, adding that the family hadn’t reacted against Gaddafi when he did the same thing, seeking the reward from Allah.

It is worth mentioning that Imam Al-Mahdi was the son of the founder of the Senussi Order, Mohamed Bin Ali Senussi. He became the leader after his father in 1859. He was one of the most prominent clerics who had participated in preaching Islam in some forgotten African areas. He also fought to free hundreds of the Africans from the European occupiers.

Imam Al-Mahdi was the father of the king of Libya, Idris Senussi, who was deposed in 1969 by the army that led by Muammar Gaddafi who had led the coup to become the leader of Libya. Gaddafi always expressed his attitude against the king and his family.