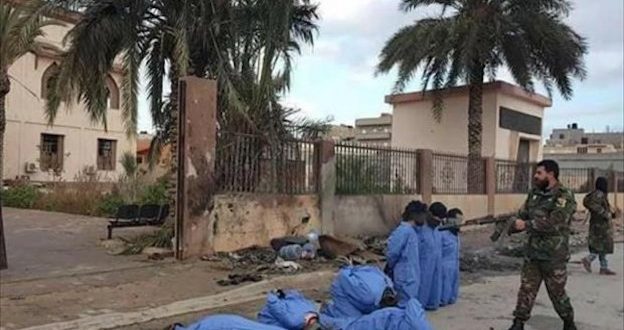 A local source in the city of Benghazi said, on Wednesday, that the field commander of the Dignity Operation, Mahmud Al-Werfalli, killed ten persons in front of Al-Redhwan mosque in Al-Salmani area in Benghazi without court.

In the same context, the Libyan social media, circulated, on Wednesday, images showing Al-Werfalli shooting the heads of ten unknown captured prisoners with their hands tied back and blindfolded wearing blue uniforms. No one knows the reasons for killing them this way.

It is worth mentioning that it is not the first time for Al-Werfalli to kill prisoners the same way. Last July, a video was circulated on social media showed Al-Werfalli executing 20 tied detainees without trial.

Earlier than that, in March, the social media had circulated other video showed Al-Werfalli shooting three prisoners in Benghazi.

In an international reaction to those crimes, the International Criminal Court (ICC) issued an arrest warrant against Al-Werfalli, because of his war crimes.

The ICC decision accused Al-Werfalli of executing more than 30 prisoners between June 2016 and July 2017 in Benghazi.

In the same context, the United Nations called, last July, Haftar’s forces to start investigations on the executions without court.

Furthermore, the UN Human Rights spokesperson, Liz Throssell, said that “we are deeply concerned that, after recent fighting in Benghazi, people taken prisoner by members of the Libyan National Army, which controls eastern Libya, may be at imminent risk of torture and even summary execution.”

Al-Werfalli executed the ten prisoners one day after the two explosions in the same place. The bombings killed and wounded more than 130 civilians.