Home / Normal / Slavery in Libya: Life inside a container 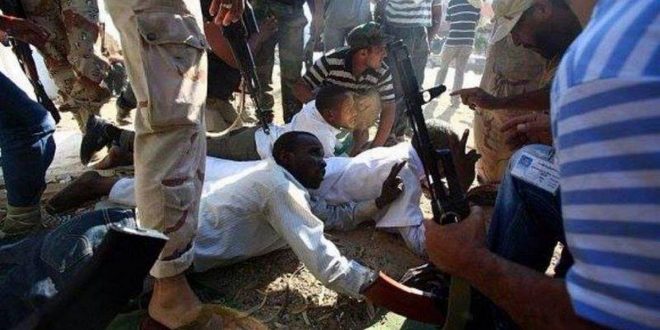 Slavery in Libya: Life inside a container

In recent months, it has been revealed that African migrants and refugees have been sold in open markets as slaves in Libya, and are held against their will in inhumane conditions in exchange for ransom money.

The revelations sent shock waves globally and sparked protests outside Libyan embassies across Africa and Europe.

Libya is a major transit destination for migrants and refugees hoping to reach Europe by sea.

Human trafficking networks have prospered amid lawlessness, created by the warring militias that have been fighting for control of territories since the toppling of Muammar Gaddafi in 2011.

According to the International Organization for Migration, there are 700,000 – 1 million migrants in Libya.

Through conversations via a smuggled phone, we managed to communicate with the two Eritreans stuck in Libya. Here is a first-person account of their lives, trapped in a war zone. 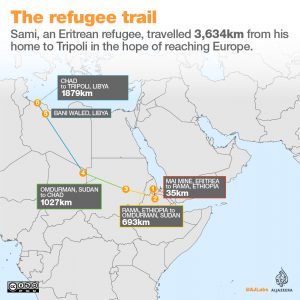 Sami, 18, from Mayoma in Eritrea

Sami left Eritrea when he was 15 years old. He travelled to Ethiopia and from there he made it to Sudan.

From Sudan, he was smuggled into Libya via Chad, after paying smugglers $1,500.

On the Libyan border, he was caught and told by the Libyans he had been sold by the Chadian smugglers and needed to pay more money. “They asked me to pay $6,500 more to proceed further,” he said.

“We were lied to. They beat us with sticks and a water hose. And they electrocuted us. We told them we had no money, but that did not stop them from beating us.

My mother had to sell our home in Eritrea and other assets we had and was also forced to borrow money from family and friends abroad for my trip.

They then took us to the town of the Libyan Bani Walid, where we were held in an illegal detention centre. They gave us one piece of bread a day.

We endured physical torture but the mental torture was worse. Our captors would systematically choose people unable to pay to set an example.

My friend died in front of me after he was electrocuted. He came with me and we survived the journey through the desert only for him to die as a slave in captivity.

Watching others being tortured made people call anyone they could for them to send money by any means. They made us call while being tortured.

The first time they tortured me they asked me to pay. I said I don’t have the money, my father is dead and I only have my mother. They asked me if I had relatives in Europe, to which I said no.

They were not pleased, so they hanged me upside down and beat me everywhere and electrocuted me. They called my mother while I was being tortured so she could hear my screams.

The detention centre had people from Eritrea, Somalia, Sudan and Ethiopia, as well as Nigeria and other West African countries.

At night, it used to be worse. The guards would get high on drugs and resort to beating, abuse and torture.

omen and children were kept separate from the men. Many girls and women were raped and had children as a result of it. Our buildings were close to each other so we would hear their screams and cries.

I stayed in detention for nine months. Once my mother secured the money, they let me go.

Upon my release, I boarded a truck with others on the way to the sea. We were stopped by another vehicle after armed men started shooting at our truck.

Our Libyan driver escaped and the men asked us who we were and where we were going. They took us and said we had to pay for our freedom if we wanted to be allowed to go to the sea and travel to Europe.

They asked us for money in exchange for freedom. When they inquired about my religion I lied to them that I was a Muslim, hoping they would treat me better.

I was lucky because they asked me for less money, which I was able to secure eventually.

I spent two months there, in a town called Az Zawiya.

We were held in an apartment building complex from where we were not allowed to go out.

After paying the ransom, they took me from Az Zawiya to the sea. But we were stopped by Libyan coast guards, who took us to Tripoli.

Then the coast guards sold us to an Eritrean smuggler who goes by the name Walid. He is notorious and runs a smuggling network with Libyans and others. His real name is Tawalde but the Libyans call him Walid. He is responsible for the torture and killing of many.

We were taken back to Bani Walid.

They kept us in a large, container-like shed. It was really a cramped area with around 320 of us and had one toilet to share. I stayed there for three months.

There were women and children in the same container as the men, children as young as two years, and there were infants born as a result of rape by the Libyan captors.

Walid was stingy with food. He would starve us and say we would receive food if we could transfer money. He would say “No money no food, you can die of hunger for all I care.”

Most days we got either no food or one piece of bread so we were hungry all the time.

The whole day and night we would just sleep and lie down without being allowed out and seeing daylight.

The scariest thing was not knowing if you would ever be freed.

Towards the end of my captivity, a Libyan man came and took me to do farming work in return for food and shelter.

After two days, I managed to escape and found shelter in a mosque. I just started cleaning there. Whenever someone would ask me who I was, I would say I was the cleaner and they would leave me alone.

There I found another Libyan man, who said he would help me get to Tripoli if I paid 750 Libyan dinar.

I told him I had no money. So, instead, he took me to his home, where I had to work for two months before he took me to Tripoli as promised. This was in September 2017.

When I arrived in Tripoli, I registered with UNHCR. I found a job as the caretaker of a mosque, where I can also sleep. This is where I am today.

I clean the mosque and I close it at night. I help other Eritreans trapped in Tripoli by making them pasta and other simple food and they also stay with me overnight in the mosque.

No one bothers us here and it’s warm inside.

I left Eritrea in search of freedom and peace. I did not want to live under dictatorship, that is why I left. I knew before leaving Eritrea that the journey would be tough. But I had no idea people would be so cruel and inhumane.

I never thought I would be sold and resold. Looking back now, had I known what was awaiting me, I probably would have stayed back in Eritrea despite the hardships there.

But now I have no choice, I can’t go back. My mother is in debt because of me. So, I must continue.

I must help her now. She lost her home because of me. I must pay off her debt.

It’s OK if I die in the sea. It’s better than the hell I saw in Libya and the hell awaiting me in Eritrea if I return. If I make it anywhere in Europe I might have a chance.”

*For security reasons, Sami does not want to be identified by photo or with his real name.

For the past five months, he’s being held inside a container illegally in the town of Gharyan, 91km from the capital, Tripoli.

Yonathan was a soldier before deserting and fleeing Eritrea in December 2016.

He had arranged for Sudanese smugglers to take him to Libya – and the journey became more hazardous and expensive than he had ever imagined.

After he crossed the border into Sudan, the smugglers demanded more money than agreed to take him to Khartoum. He had to call home and scramble for money.

“They tortured us, beat us and burned us. I called my family and told them we are in hell, we need money or they will not let us go.

I spent three months held in captivity there until I secured $6,000 through my family, who gathered it from relatives and friends in Eritrea and abroad.

Then the smugglers took me to Khartoum. I worked there as a hotel cleaner. I spent almost six months there before I paid smugglers to take me to Libya. The trip cost me $1,600.

No water, no daylight

When I entered Libya, I was captured by Libyans wearing uniforms. They told me “We can’t let you travel to the sea to cross over to Europe.”

They took me and the group I was travelling with to an area far away from the coast. They handed us over to a group with Sudanese and Eritrean smugglers in charge.

That is when I found out we had been sold.

Our new captors told us we had been sold by the Libyans and we had to pay $5,000.

I have been here for five months now.

We are kept indoors 24/7 with no access to running water or daylight.

I smuggled the phone in here and my family knows I am here, but they are helpless.

For the majority of the people held with me, their families know nothing about them. No one knows if they are dead or alive.

We are scared because we have not seen a single person from the outside since coming here.

We know detainees in other containers have been in touch with Eritrean-Swedish journalist and human rights defender Meron Estefanos.

You are the first one to contact us, we have had no one calling us from the outside.

Every Sunday, they tell us they will release us within two weeks, but then the time passes and nothing happens. When they first took us, they said we must pay money in order to be freed. But for weeks now they have not asked for money to release us.

They are just keeping us here without any information. We don’t know what is going to happen to us.

The container is made of tin. It’s really cold right now, you feel it in your bones. We have a blanket each. But with the hunger, you feel the cold even more.

We sleep and wake up in the same place awaiting our fate. We don’t know if we will ever make it out.

We have many sick people among us without any access to medicine or doctors. We don’t move much because we are so weak and hungry, we just sleep. One Somali man has died

I don’t see any positive end to this. We all keep our pain and fears inside and we just sleep.

The thought of returning to Eritrea is like returning to another, bigger prison. If I was returned there against my will, I would try to get out again.

The moment I was told by the Sudanese and Eritrean smugglers the Libyans had sold me, my stomach turned inside out.

The shock, fear, anger and frustration made me bleed when passing urine or stools. Realising I had been sold like a slave was the worst feeling.”