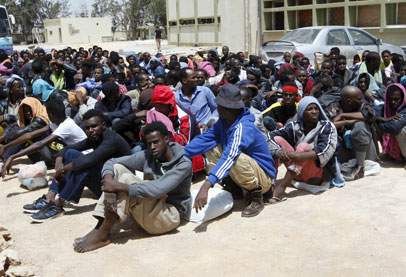 Tribal conflict and militia rule continue to be the largest impediments to ending Libya’s smuggling business. Though 252 Nigerian immigrants were repatriated from Libya to their home country on Jan. 9 and a regional African delegation visited detention centers to accelerate deportations from Libya, illegal immigration combined with a lack of rule of law continues to make the trade of Africans a profitable business in Libya.

Recently, the treatment of African migrants, most of whom are sub-Saharan, caught international attention, but the slave trade has been a daily reality for Africans in Libya for over four years, since the start of the second civil war in 2014, when Libya became a route for migrants to reach Europe. “The closing of the route from Libya into Italy in August had no impact on the magnitude or severity of the slave trade. It has been going on for a long time,” Mac K B Simpson, a Ghanaian expert on migration and human trafficking based in Tripoli, told Al-Monitor.

It is almost impossible for journalists to access areas where the slave trade is taking place in the northwestern and southern regions of Libya. The danger is too great. But Simpson was able to share the story of James Kwarteng, a 37-year-old Ghanaian migrant who was abducted from the house where he lived with other migrants in the northwestern coastal city of Sabratha by rogue militias, taken to an unknown location and ordered to pay 10,000 Libyan dinars ($7,500) for his release.

Kwarteng had been working as a mason in perilous conditions to fund his journey to Italy. When he boldly told his abductors he didn’t have that kind of money, the drunk men shot him in the hand, beat him and left him to die. His hand was untreated for weeks and was left badly damaged.

Eventually, government-aligned militants found him and sent him to a deportation center for medical treatment. There, Kwarteng was able to contact his mother, who sent him money through a middle man to buy a ticket back to Ghana, where he now resides with his wife and three children. Though Kwarteng was lucky to return home and tell his story, others like him remain captive in the hands of Libya’s rogue militias and gangs. If they are lucky, government-aligned militias may help them, but even once they reach the deportation centers they live in squalid conditions and often wait months before getting a ticket home.

Despite the construction of more deportation centers in the northwestern regions outside Tripoli and in Misrata, a flood of migrants has overwhelmed the facilities. Migrants continue to enter the country through the southern border with Niger, and deportations cannot keep up. The Tripoli government is responding by making empty warehouses and buildings into detention centers, said Simpson. But these spaces will eventually fill up.

Since the start of the year, 974 migrants have reached Italy. Though this number is down 2,393 over the same period last year, migration still remains a problem. The Italian government is turning to other means to contain the crisis, sending 470 troops to Niger to end the smuggling business at the southern border. But it may not work.

The Fezzan Libya Group is an independent organization based in the southern city of Sabha reporting on events in the region. A source there told Al-Monitor on condition of anonymity for safety concerns that he was in contact with smugglers at the Niger-Libya border, where a French military base has been operating for years. The smugglers told him the French soldiers let them operate freely as they drove trucks filled with African migrants through the southern border. As a result, he remains skeptical as to whether the Italian troops will behave any differently. “We see, on the main road, trucks of cars carrying migrants — it’s a very open operation because there is no government to stop them.”

Tribal rule in the southern region also poses problems for establishing control of the area. The Tebu tribe largely controls the border with Niger, while the Tuareg tribe controls other routes, like the Obari area, which leads to the main southern city of Sabha. Although the tribes themselves may not be responsible for smuggling, some of their members are involved and the tribes may profit from their activities. Italy has tried repeatedly to make deals with or pay Libya’s southern tribes through the Tripoli government to curb illegal immigration, but such efforts have not paid off. “You can’t pay criminals to stop criminal activities,” the source at Fezzan said. “They will stop until they get paid or see an advantage from doing so, but then they will get back into it.”

The widespread abduction, torture and extortion of African migrants remains a thorny problem in the country. The smuggling business is one of the only viable sources of income for some Libyans in the lawless northwestern and southern regions. And while Europe keeps its borders open, smugglers continue to see plenty of business.

“Racism remains one of the largest factors leading to the mistreatment of Africans at the hand of Libyans,” the source explained. Libyans have tried to redeem their image after the media exposed the slave trade by paying higher wages to the migrants working for them. “Now the Libyans are serious about it because of the outrage,” Simpson added. Despite this improvement, migrants continue to be sold to wealthy Libyans for cheap labor or, now that jobs are scarce, among rogue militias, which extort them for money. 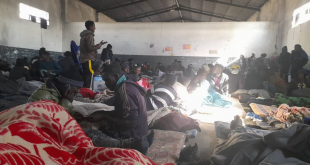