Home / Normal / AU: Over 13,000 migrants repatriated from Libya this month 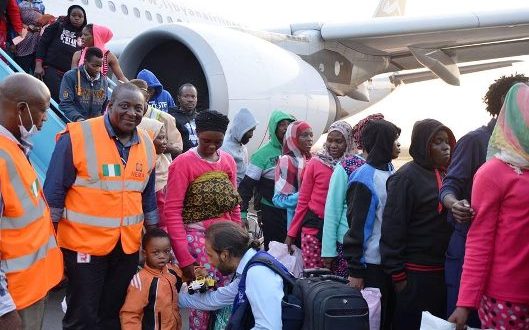 AU: Over 13,000 migrants repatriated from Libya this month

More than 13,000 migrants have been repatriated from Libya since the beginning of December, according to the African Union (AU).

The scale of the repatriation comes two months after CNN uncovered large scale abuses against migrants in Libya where undercover slave markets were being held.

The UN responded through initiatives to evacuate migrants to a country where they can be safely processed for resettlement. The majority of those who arrive in Libya do so as a base to get to Europe and mainly hail from sub-Saharan Africa.

The AU’s plan was to fly 20,000 migrants from the war-ravaged country, though the target has not been met, Chairperson of the AU commission Moussa Faki Mahamat, said the campaign remains on course.

“We have 13,000 and every day the number increases,” Faki explained during a press conference at the close of an AU summit in the Ethiopian capital Addis Ababa.

Libya has been struggling with maintaining security since the country collapsed into lawlessness following the ousting of long-time leader Muammar Gaddafi during an uprising in 2011.

Tens of thousands of migrants have since used Libya as a transit hub to seek a better life in Europe with many drowning in the Mediterranean after being sold poor quality boats by lucrative human smugglers who have been at the centre of torture and rape of migrants.

Along with the UN and EU, the AU is helping stranded migrants leave the country for their own safety. Those who cannot return to their native countries due to security reasons will be deported to nearby Niger and Rwanda.