Home / Normal / Libya’s Constitution is the Minimum Requirement for Elections 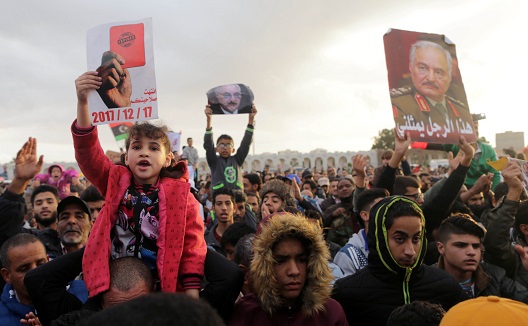 Supporters of Eastern Libyan military commander Khalifa Haftar take part in a rally demanding Haftar to take over after a U.N. deal for a political solution missed what they said said was a self-imposed deadline on Sunday, in Benghazi, Libya, December 17, 2017. REUTERS/Esam Omran Al-Fetori - RC188A16C0B0

Libya’s Constitution is the Minimum Requirement for Elections

On January 10, 2018 the United Nations endorsed the UN Support Mission in Libya’s (UNSMIL) intention to hold national elections by the end of 2018, led by the new UN Special Envoy to Libya, Ghassan Salame. So far, more than 2,000,000 citizens (about 32 percent of the adult population) are already registered to vote.

Many Libyans are hopeful that elections will finally bring stability and order to a state which has been plagued with violence, corruption, and lawlessness for almost seven years. However, it will be extremely difficult to meet these expectations if a mandated constitution does not exist to check elected officials, or if there is no legal framework of action for newly established institutions.

Currently, Libya’s humanitarian and monetary crises are the most pressing concerns for ordinary citizens. Living conditions are worsening: frequent water shortages, electricity outages, and the rising cost of food prices impede daily life. Readily available currency is sparse and the value of the Libyan dinar continues to fluctuate in the black market. Libya’s monetary crisis is the culmination of a divided country and society, corruption, prodigal spending, and impunity for just about anyone. Many are hopeful that the prospect of elections could pave the way to the appointment of a new president and the creation of a parliament—one that has rightfully won legitimacy from the population.

So far UNSMIL’s Action Plan for Libya and its attempt to revive and extend the Libyan Political Agreement (LPA) has been defined by constant setbacks and complications. After delegates from Libya’s warring factions signed the LPA on December 17, 2015, government officials and signatories have failed to make significant progress in implementing it. Without sufficient legitimacy and international support, the Government of National Accord (GNA), the interim government created by the LPA, has no real authority to govern the country. The GNA is viewed as a government imposed on the people, one that never fully galvanized the necessary consensus to rule; instead, the GNA acquired its power from influential militias in Tripoli, who allowed the government to ‘operate’ securely.

In addition to Salame’s efforts to amend the 2015 LPA, the Action Plan for Libya called for a national conference to establish consensus principles between divided factions. This has fallen short of successful. The Action Plan for Libya also intended to hold new elections based on the terms and conditions of a new constitution approved by popular referendum. However, a constitution approved by the Constitutional Drafting Assembly has yet to be ratified by the House of Representatives (HoR). Without an established consensus to reconcile factions and division between rivals, and without a new constitution, the political and security environment for elections in Libya remains comparable to conditions in 2014, where polarized political factions and security concerns derailed the election turnout.

There is no indication that Salame’s push for elections in 2018 will yield a different outcome than the turmoil experienced four years ago. The rush to hold elections without a constitution could have disastrous consequences and further fragment an already delicate political environment. Without a constitution, the newly elected government would essentially rule unchecked by any institutional framework, which could possibly amplify Libya’s monetary crisis with excessive spending and increased corruption.

According to Article 1, Section 4 of the LPA, the UN- brokered agreement officially expired on December 17, 2017, a point that Field Marshal Khalifa Haftar, the de-facto leader of eastern Libya, and others, have publicly proclaimed. To opponents of the LPA, the upcoming election process will continue to be viewed as an extension of the LPA. Those unsatisfied with the election results will deem the election as invalid, by claiming it as an extension of the expired LPA, delegitimizing the legality of the elections. Most probably, spoilers of the election results will not concede power over to newly elected officials. If elections were to take place, security and logistical challenges would remain a crucial factor in maintaining free and fair elections. Even with international election monitors and observers, it is almost impossible for any foreign or outside actor to control the grim security situation on the ground and coerce political players to accept the election results.

To those who currently hold power, Libya is a zero-sum game, and hence they pose the most dangerous threat in the aftermath of elections. If unsatisfied with the election results, any number of militias or political players could easily make a play for power if they suspect the election process or results could weaken their influence. Most notably, Haftar recently threatened a military takeover of the country, after stating that if elections did not bring an end to the current bloodshed and chaos then, “we will say enough is enough and take action.”

While many pundits are concerned that the run up to elections could bring about greater political instability and violence, what should be just as alarming is the very real possibility of a wave of violence in the aftermath of elections—if those unsatisfied with the election results, make an armed play for power. Hosting elections without the necessary legal and security prerequisites could very well spark a wave of political instability and armed conflict that the international community has been hoping to avoid.

Any elected government that hopes to rule as an effective institution will not only have to earn the legitimacy of the people in Libya, but also eliminate the threat posed by militias and political spoilers of the election. For the foreseeable future, no rational militia is willing to give up their leverage over the state and the plentiful perks that come alongside that for the sake of national reconciliation.

The reality in Libya is that any government elected into power will not have the capacity or authority to eliminate the influence of militias, and will be forced to at times contend with, and at other times, rely on them for power, legitimacy, and security—as past governments have done. A newly elected government therefore runs the risk of being held hostage to the influence and leverage that militias currently control government institutions, resulting in the inability of the new institution to effectively govern. However, if a government can earn popular legitimacy through elections, be legally checked by a constitution, and is internationally supported, it will be able to force armed groups to choose between rejecting the government or working themselves into the new system.

While none of these objections necessarily negate the election process nor nullify the LPA, if elections are held prior to ratifying a constitution, and with the current security circumstances, the risk of having a negative outcome—a government that lacks legitimacy and is beholden to non-state actors—is much higher. Considering the erratic security situation in Libya, even with an approved constitution prior to elections, no one can predict what the aftermath of elections may hold. But what is undeniable is that an approved constitution prior to election day will only strengthen the prospect that elections could pave the way to a measured resolution of Libya’s turmoil.

At the very least, a legal framework that acts as a temporary constitution and establishes basic guidelines for the government, with an instituted timeline for ratifying a full constitution, could be a middle of the road option if the election process continues as scheduled. There is no doubt that the solution to Libya’s political, economic, and security crisis can only be resolved through an agreement, but rushing such a sensitive process without the required prerequisites for doing so; could trigger a wave of violent unrest in an already volatile state.