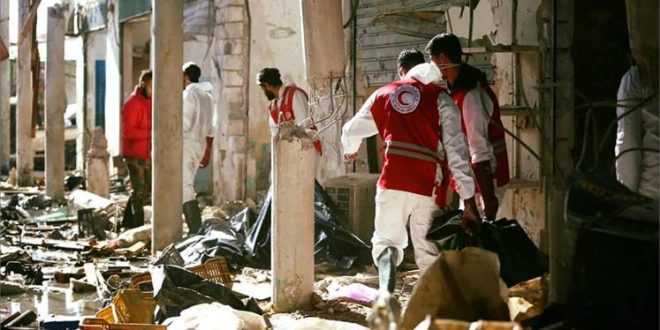 The United Nations Support Mission in Libya (UNSMIL) said from 1 January to 31 January 2018, it had documented 102 civilian casualties – 39 deaths and 63 injuries – during the conduct of hostilities across Libya. This, it reported, was a sharp rise from previous months. Victims included 33 men, one woman, and five boys killed and 62 men and one boy injured.

The report said that the majority of civilian casualties were caused by Vehicle-Borne Improvised Explosive Devices (VBIEDs, 30 deaths and 56 injuries) followed by explosive remnants of war (ERWs, six deaths and five injuries), gunfire (two deaths and two injuries) and shelling (one death).

In Benghazi, UNSMIL documented civilian casualties (36 deaths and 63 injuries), Tripoli (two deaths) and Abu Kammash (one death). This month also witnessed an additional 32 casualties from other violations of international humanitarian law and violations or abuses of human rights in al-Zawiya, Benghazi, Derna and Sabha.

On 5 January, a 50-year-old Algerian national sustained fatal gunshot wounds in the crossfire during armed clashes in the area of Abu Kammash between forces under the command of PC-appointed Major-General Ossama Jweili and local armed groups.

On 15 January, an armed group from Tajoura under the command of Bashir al-Bugra launched an attack on the Mitiga airport, controlled by the Special Deterrence Force. At least two civilians, a 51-year-old female employee of a commercial airline and a 91-year-old male resident of Tajoura, were killed in the ensuing fighting, which spread to residential areas west of the airport.  UNSMIL was unable to ascertain the civilian status of any of the injured.

On 23 January, a twin bombing in front of the Bi’at al-Radwan mosque in Benghazi led to a heavy civilian casualty toll. The first car bomb was detonated as worshippers were leaving the mosque following evening (isha) prayers. The second car bomb exploded some 20 minutes later after rescuers had rushed to the scene of the attack.  According to medical and military sources in Benghazi, at least 30 civilians were killed, including three boys and an employee with Libaid, a humanitarian organization.

At least 56 civilians were admitted to hospitals for treatment for injuries sustained during the attack. Some 40 others received emergency first-aid. A member of the Libyan Red Crescent was among those injured in the attack.

ERWs continued to claim lives and maim civilians in Benghazi neighbourhoods that have witnessed protracted fighting, including Souq al-Hout and al-Lithi. Between 4 and 30 January, four men and two boys were killed and four men and one boy injured when unknown explosives detonated.  This included an incident on 30 January where two boys, aged 10 and 11, were killed and a 13-year-old boy was injured in an ERW explosion in a street in al-Lithi.

On 22 January, armed men reportedly affiliated to the LNA opened fire at the main entrance of the Benghazi Medical Center resulting in the injury of two hospital employees. An alleged perpetrator was reportedly detained by the military police in Benghazi.

A number of commercial planes were damaged in the attack on the Mitiga airport on 15 January, which was closed for a number of days.

The Benghazi Revolutionaries Shura Council and allies are believed to have been responsible for leaving mines and ERWs in areas of Benghazi they controlled prior to their retreat. No group claimed responsibility for the deadly attack on the Bi’at al-Radwan mosque in Benghazi. UNSMIL was unable to determine with certainty which parties to the conflict had caused the other civilian casualties in January.

On 3 January 2018, unidentified assailants fired shots at the director of the Department of Education in al-Abyar at his home. He died from his injuries the next day.  He reportedly received death-threats after announcing his candidacy for parliamentary elections.

On 14 January, a 13-year-old boy was riding in a vehicle in central Sabha on his way back from school, when unknown assailants opened fire in an apparent attempted car-jacking, leaving him fatally wounded.

On 20 January, a dispute between participants at an event organized by youth in southern al-Zawiya to promote reconciliation between tribes escalated into armed clashes, leaving one man dead and another injured. UNSMIL has not been able to ascertain their civilian status.

On 24 January, still images and a video emerged on social media purportedly depicting a field commander with the Special Forces, Mahmoud al-Werfalli, shooting point-blank 10 blindfolded men dressed in blue overalls, as they knelt down with their hands tied behind their backs. Their bodies were then loaded into the back of a pick-up truck in front of a large crowd of onlookers.

On 15 August 2017, the Pre-Trial Chamber 1 of the International Criminal Court issued a warrant for the arrest of Mahmoud al-Werfalli, for the war crime of murder.

On 24 January, the bodies of two men bearing gunshot wounds were found in a rubbish dump in Benghazi. The two were blindfolded and had their hands tied being their backs.

On 26 January, five bodies were found in the area of al-Lithi in Benghazi, bearing gunshot wounds including to the head. Sheets of paper entitled “Identification of Khawarij”  with the men’s names, addresses and alleged crimes against the “army and police” were found next to the bodies. Warnings to families not to hold funeral services were also written on these papers. According to information received, two of the five victims were taken from their Benghazi homes by groups of masked armed men on 23 and 25 January, respectively.

On 25 January, the bodies of three men bearing gunshot wounds were brought to the Herish Hospital in Derna. A video posted on Facebook pages, affiliated to the Derna Mujaheedeen Shura Council, showed at least one of the men being interrogated by an unidentified individual about his alleged support to the LNA.

On 28 January, unknown armed assailants attacked a shop in the area of Mahdia, shooting dead its owner before setting the place ablaze. On the same day, 28 January, unidentified armed men opened fire on the Sabha headquarters of the Installation Guards, killing two policemen and injuring another. The body of an Awlad Sliman member of the 6th Brigade was also found on 28 January in Sabha. He had been seized by unknown perpetrators days earlier from outside the Brigade’s base.