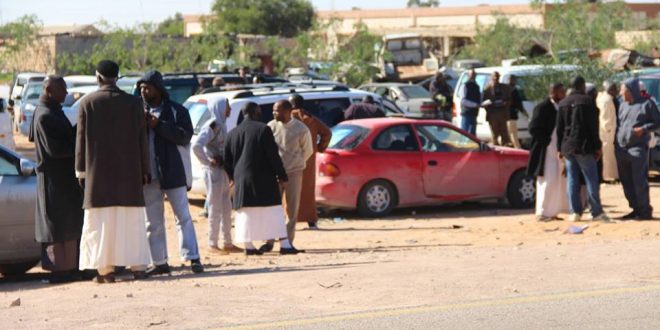 Tawergha makeshift camp on the fringes of their city attacked

Sources reported Sunday that a newly installed makeshift camp for Tawergha IDPs in Garart Al-Gatef area between Bani Walid and Tawergha was attacked by gunmen.

Local media also reported Libyan Relief Authority’s sources as saying that gunmen driving armed vehicles stormed into the camp and fired gunshots in the air, stealing an ambulance of Bani Walid Hospital on their way out.

“The gunmen entered with their vehicles inside the camp and some of the people inside tried to stop them, then the situation turned to badmouthing and throwing stones on the vehicles, so the gunmen started shooting and burning down tents leaving the IDPs in panic, with some fleeing the area.” The sources added.

Returning Tawergha IDPs from east and south Libya set up a makeshift camp in the open in Garart Al-Gatef area after their return was hindered, despite the fact that Bani Walid municipality tried to provide the families (about 600) with residence, but they preferred to stay in the open air.