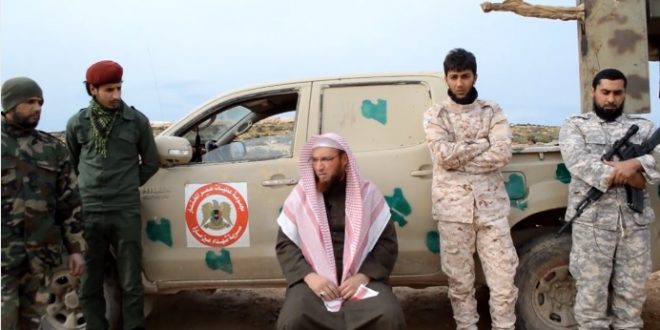 Warlord Khalifa Haftar is doing whatever it takes to have control of more territories in the country. His militants have been besieging Derna for more than a year, cutting food, fuel and medical supplies. They use all kinds of weapons to shell the city as they try to advance closer to the city borders.

But despite the military support they receive from Egypt and the UAE, their attempts to advance and control the city have so far gone in vain.

Now, Haftar’s militants have got another kind of support, a spiritual one that shows them “the road to Allah’s paradise.”

In Ein Mara, a neighboring town to Derna to the southwestern direction of the city, Khalifa Haftar dispatched one of his Salafist loyalists to preach his militants, who are depriving more than 200.000 people of food and medical supplies, and brainwash them that Allah’s paradise is getting closer to them.

Saudi-influenced Abu Abdul-Rahman Al-Makki, a Libyan extremist Salafist preacher, stayed for several hours in Ain Mara frontline to encourage the militants to “Jihad” and to promise them of paradise if they crush “the Khawarij” in Derna.

“You are in a Jihadi war; thanks to Allah Who guided you to this great worship,” Makki motivated the militants.

“You are fighting the most evil people on earth; blessed is the one who kills them.” He further motivated.

Abu Abdul-Rahman Makki, real name is Yousef Ben Faris Al-Daghari, is an extremist Salafist preacher who usually issues Fatwas in favour of Khalifa Haftar and Dignity Operation. He used to live in Saudi Arabia before returning to east Libya to stand with Khalifa Haftar’s self-styled army.

In April 2017, he issued a controversial Fatwa saying Misrata’s Third Force fighters are “unbelievers” and must be killed and crucified because they are “Khawarij.”