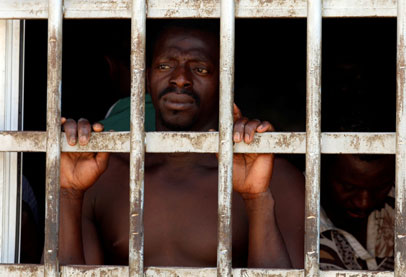 Meeting the Libyan smugglers getting rich dealing in migrant lives

“Half of the people in Garabulli is still in this business; nothing has changed after the agreements with Italy.”

Ibrahim is thirty-two years old, and has a degree in civil engineering. He lives in Garabulli, a coastal town 60km east of Tripoli.

He is tall, slender, has a clean-shaven face. He wears a stylish sweatshirt, a pair of designer shoes, and is keen to show off the latest model of tablet he has in the car.

Ibrahim shows off his economic possibilities. He wants to buy a house in Tunisia, and one in Turkey. Ibrahim is rich. Ibrahim is a smuggler.

“I started for money. This is the only reason. At the beginning I took care of the minor tasks, I got the engines for the rubber boats and at night I carried the migrants from the countryside to the beaches, and the boss paid me.

“Then I understood all the mechanisms and I created my own circle. There are five to ten people working for me – it depends on the flow of people leaving, from the sea conditions, from the weather.”

Ibrahim sits on the floor inside a concrete building in the countryside outside Garabulli.

There are dozens of concrete buildings in view that seem abandoned at first sight. “The smallest are for the guys who work for me, the biggest ones – the warehouses – are used to keep the migrants before the departures,” Ibrahim says.

In his room there are pillows, a television, a half-empty water tank. Ibrahim explains that this is the building where he waits for his men at night, when they arrive to transport the migrants from the warehouse in front of us to the beaches.

The warehouse has grating on the windows and padlocks on the door.

“In this part of Libya there have been no changes; we have only heard about the agreements with Europe, but the effects have not arrived here, thankfully.

“Men and women continue to arrive from the south – they stop at Beni Walid, the guys from Beni Walid transport them here and everything goes on as usual. Garabulli’s warehouses are as full today as they were months ago.”

Ibrahim has his “price list”, like everyone else. A “ticket” to cross the Mediterranean costs “at least $500” then – he says – the price increases if you want to choose the safest place on the wooden boats.

The seats on the rubber boats costs the same for everyone, and they hold up to 80 or 100 people. When the sea is calm, he crams up to 120 on each.

The rubber boats cost the traffickers about 20,000 Libyan dinars each. At the current black market exchange rate – one dollar buys nearly nine dinars – that’s about $2,400.

One such overcrowded rubber boat left the shores of Garabulli a month ago.

It sank a few miles from the coast.

The coast guard, arriving from Tripoli, brought 140 people back to the shore a few hours later. At least 30 corpses were wrapped in white bags and taken to Tripoli. Thirty bags without names. Thirty dead without identities.

“It’s a risk, of course. Sometimes they are captured, sometimes they drown, but they are aware of [the risk],” says Ibrahim. “I just organise the boats, I have no other responsibilities.”

Ibrahim takes us in a 4×4 vehicle towards the most popular beaches for departures, crossing the dunes following paths already traced by hundreds of journeys from the warehouses to the sea.

“At night we bring them here and leave them waiting in the woods while we are preparing the boats,” he says, pointing to trees and bushes.

The paths lead to the bay near the great lighthouse of Garabulli.

Migrants leave from the right of the lighthouse. On the sand there are remains of shoes, slippers, bags. The last things either abandoned or lost before leaving.

To the left of the lighthouse is the local coast guard headquarters.

But they have no power here. They don’t even have any boats. The only vessel they had is now lying, destroyed, in the courtyard in front of their office.

Behind the building are buried dozens of people; bodies of those who died in the sea.

“The coast guard made a hole with a bulldozer and threw them in there, they did not know where to put them,” says Ibrahim, without emotion.

There are no gravestones here. Not a single plate, not a single name. There is nothing to indicate that this stretch of land hosts the bodies of men, women and children who died at sea in a despeate attempt to escape.

Around the coast guard headquarters, as if it weren’t even there, the traffickers drive freely, their vehicles without registration plates. Ibrahim points them out, one by one.

He knows to which groups they belong, he knows who’s planning the next trips.

Khaled is one of Ibrahim’s drivers. He is 29 years old and he has a wife and two small children. Up until a year and a half ago, he was a teacher working in Tajoura, a suburb of the capital.

Then the government stopped paying the salaries of civil servants, and cash became scarce. Unable to leave the country, Khaled joined Ibrahim’s gang. He is paid 300 Libyan dinars ($34) for each trip from Beni Walid to Garabulli. Three, four migrants at a time.

So Khaled, a young mathematics teacher with no salary and with no prospects, has become part of the only business in Libya that continues to ensure an uninterrupted flow of cash: human trafficking.

“There are many guys who ask me for work,” explains Ibrahim. “Here in Libya there is no work, there are no plans for the future, there are no investments. Young people like me do not know what to do – so organising the trips of the Africans, it’s the simplest thing.”

Ibrahim calls the migrants for whom he organises what is in many cases their final journey “the Africans” – as if he and those fleeing hunger and wars belong to two different continents.

“We will continue in our business as long as we can.

Libya is today a hell on earth for migrants, yet for decades the north African country has been the destination of choice for thousands of people searching for work, both in Libya and beyond the Mediterranean.

Before the revolution of 2011, Libya’s rich and expanding economy employed almost one million foreign migrants out of a total population of just over six million.

According to Foreign Policy, the number of “foreigners” in Libya before 2011 – including those not formally employed -may even have numbered two and a half million, ie more than one-third of the inhabitants of the country.

Today it is difficult to clarify the numbers of migrants present in Libya.

The president of the African Commission, the Chadian Mahamat Moussa Faki, at the end of the African Union-EU summit in Abidjan in November declared there were between 400,000 and 700,000 migrants held across dozens of Libyan detention centres.

The International Organization for Migration says more than 423,000 migrants are in captivity in the North African country.

The support for and redefinition of the detention centres is one of the most important topics of diplomatic relations between Europe – Italy in particular – and the Libyan government of Fayez al-Sarraj.

In recent months, the anti-illegal immigration department of the Libyan Interior Ministry has closed some detention centres, only to open new ones, apparently with more humane conditions.

The detention centre in Tajoura, in the eastern suburbs of Tripoli, holds more than a thousand people. There is now air conditioning here, and the walls have been repainted in blue.

But the doors remain closed with padlocks, the inmates – whose “crime” is to leave their country for another – sleep on mattresses thrown on the ground. Despite their names, the centres are still prisons controlled by armed militias.

The power of armed militias is the main problem that Sarraj faces.

In Tajoura, power is in the hands of a militia controlled by the young warlord Haytem Tajouri; currently loyal to the Sarraj government.

It is the militias themselves that arbitrarily decide if the staff of local organisations can enter and leave the detention centres, and in which places volunteers and medical staff can work.

For local organisations, getting access to the centres is an obstacle course, and a prime example of the rampant corruption in Libya, in the connivance between militias and institutions.

“We do not know how to do,” says Ahmed, a 27-year-old from Tripoli who works for a local NGO. “We must enter the detention centres to see the conditions in which migrants are living, to take them questionnaires, but we are awaiting the authorisation of the Ministry of the Interior and at the moment it seems to guarantee access only to organisations close to [the minister].”

Ahmed says recent media reports showing an auction of migrants – reports which caused a global wave of indignation – have led to a tightening of access to detention centres, making the work of local humanitarians almost impossible.

“We can not record the presence of migrants,” says Ahmed. “Our feeling is that we are losing trace of dozens of people while they are moved from one centre to another. They could be sold, kidnapped. Nobody can say. Nobody can ask.”

The migrants living in Libya in the hidden slums on city outskirts number well into the thousands. They live in concrete rooms, they sleep in five or ten to a room, they never go out except for work. They are exploited by the Libyans.

John is 24 years old. He came from Ghana a year and eight months ago. He wanted to cross the sea to reach Europe.

He was captured by the Libyan coast guard – and his hell began.

“I have been moved to three different prisons,” he told us.

“After they caught me they took me to a prison in Tripoli. Then one night a group of armed boys entered. They took me and 50 other people by force and took us to a shed where we stayed for weeks. They beat us every day, we did not have enough water or food.

“If you had seen my body you would not have recognised me; I was skeletal. The Libyans do not think of us as people, they think of us as objects. Our life does not count, blacks count only when they have to sell or blackmail us. Now we are here and anyone can enter, take us away and ask our families for money to free us.

John suffered daily violence until his family sent $1,500 to the militia that kidnapped him. Since his family paid the ransom, he has lived in a shantytown east of Tripoli.

John wanted to get to Europe.

Today, however, he would only like to go home.

“I still want a better life for myself. But Libya is hell, I just want to run away from here but I do not know how.”

During the Abidjan summit, Italy’s Prime Minister Paolo Gentiloni expressed his satisfaction at what he called an “extraordinary result” – the collapse, in five months, of the number of irregular migrants to Italy and the significant increase in “voluntary repatriations”.

Yet migrants continue to die, drowned in desperate attempts to leave Libya’s shores, and many of those who attempt to return home do so after having suffered months of blackmail, abuse and violence.

They do it because, after living in Libya, they prefer to return to face the hunger, wretchedness and violence from which they had escaped.

John wakes up frightened every day. “We have to defend ourselves from the police, from the militia boys, from the prison guards. Anyone can capture and sell you. Staying here is a gamble, like crossing the sea. You can live or die.”