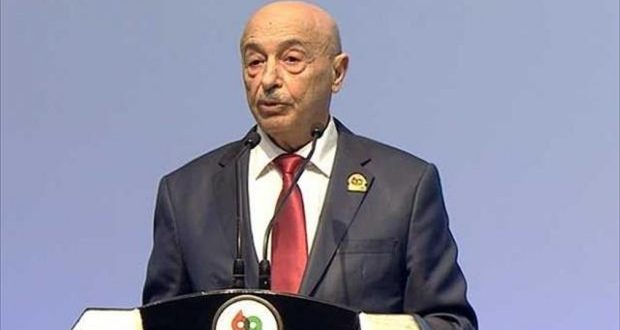 The parliamentary speaker of the Torbruk-based House of Representatives (HoR) in the east of Libya has affirmed that military strong man Khalifa Haftar’s Libyan National Army will be launching an attack on Derna in coordination with Egyptian military forces.

Speaking to Cairo-based Youm7 newspaper, Aqilah Saleh explained how the military operation in Derna is “very significant for Egypt in order to block the route for terrorists” into the country.

Egyptian companies will also be helping to rebuild war-torn areas in Libya which Saleh commended as an example of positivity in helping the country move forward.

“Qatar and Turkey’s interventions in Libya are totally rejected as Turkey is a sponsor of terrorism in the country,” he added.

Saleh further explained how the Presidential Council’s government, led by Fayez Al-Sarraj, is a trusteeship government which the HoR and General National Congress did not consent to.

“The Libyan Political Agreement is a play plotted by the international community and despite the fact that the HoR partially agreed to it, there is no real political agreement. Thus we find it strange that some countries are dealing with the PC as the legitimate government in Libya as if the HoR’s Interim Government is illegitimate,” Saleh remarked.

The UN-backed LPA was signed in 2015 to help move beyond Libya’s political stagnation following an uprising in 2011 that ousted long-time leader Muammar Gaddafi.

Egypt intervened in Libya militarily following a Daesh attack on a Coptic Christian convoy last year, blaming Libya for allowing its militant fighters to enter Egypt and conduct operations from the turbulent Sinai.

Daesh has lost its strongholds in Libya following operations lead by Haftar against them since 2014. Following regaining control of Benghazi last year, Derna has been besieged in a bid to drive militants out of the city.

The UAE has sent F-18 warplanes to enhance its military presence in Egypt earlier this week in preparation for a possible attack on Derna.

International Relations and CooperationSecurity ForcesSecurity Situation
All
2018-02-14
asaeid
Previous Supreme Court rules that its not within jurisdiction of Beida court to rule on constitutional affairs – clears way for HoR to legislate for a referendum
Next Russia: Is Syria’s Fate Libya’s Future?