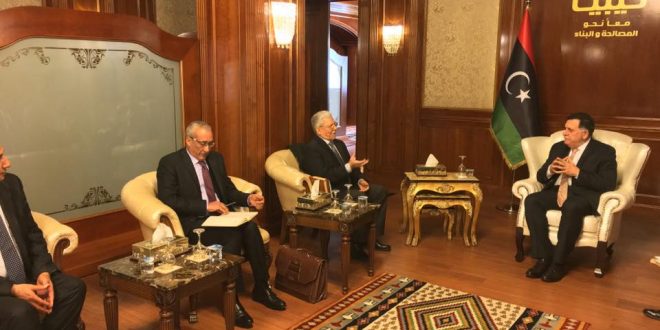 The Secretary-General of the Arab Maghreb Union, Taïeb Baccouche, met with the Head of the Presidential Council, Fayez Al-Sirraj, in Tripoli on Sunday.

Baccouche urged Al-Sirraj to call for holding a Maghreb summit to get the union involved more in the Libyan crisis, as Libya is now the President of the union.

The Secretary-General added that they at the union never stopped attempts and proposals as well as initiatives to stark comprehensiveness among the union member countries.

Baccouche also said that foreign ministers met 34 times, in addition to culture, education, health and interior ministries, which held successive meetings, adding that the agreements reached at those meetings were not activated as the presidency council of the union was not holding meetings.

“I am very sorry that the union is on freeze and will try to consult a way to hold a meeting for the union after overcoming the obstacles facing it.” Al-Sirraj said, adding he hopes the member countries would accept to attend a Tripoli-hosted summit so it becomes the kick-start of the union’s institutions’ role in the region.

International Relations and Cooperation
All
2018-02-18
asaeid
Previous Libya’s western government holds military parade in Misurata
Next Libya 2011: Through the Fire