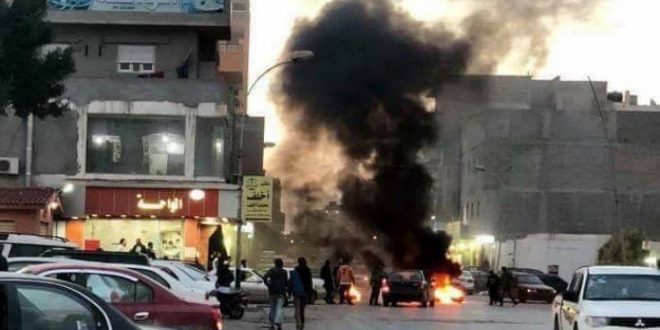 Chaos led by military officers in Benghazi over Haftar’s decisions

Riot and protests led by military officers from Al-Saiqa Force of Dignity Operation led by Khalifa Haftar, along with armed civilians, broke Monday night in Benghazi.

Shouting, gunshots in the air, tires burning were the scenes over the night hours in Benghazi in order to protest Haftar’s orders, which he issued a few days ago regarding dismissing Wanis Bukhamada from his post as the Head of the security room of Dignity Operation.

Eyewitnesses said the protesters held anti-Haftar slogans and their reckless behavior led to injuring some residents, with reports about one person killed, knowing that Al-Jalaa Hospital in Benghazi said a girl aged 25 was killed by a random gunshot during night in Benghazi’s pandemonium.

“We have arrested 6 people who carried out the riots to wreak havoc in Benghazi and 4 others were injured as they exchanged fire with the patrols tasked with prevailing security in the city. We will deter anyone who tried to start riots and chaos in the city” Benghazi Central Operations Room announced.

Wanis Bukhamada was dismissed by Haftar last Thursday and the Chief of Staff of Haftar’s army Abdelrazik Al-Nathori was appointed in his place. Al-Saiqa Force spokesman, Mioud Al-Zway said the decision was aimed at tasking Bukhamada as a commander of Derna frontline and sending a number of Al-Saiqa Force brigades to fight in and advance on Derna.

Before Monday’s protest, Benghazi saw a protest on February 08 by yet another group of “army fighters” who are under the command of Haftar. The protests were sparked then by the handover of Mahmoud Al-Werfalli to Haftar’s command over being wanted for war crimes by the International Criminal Court.