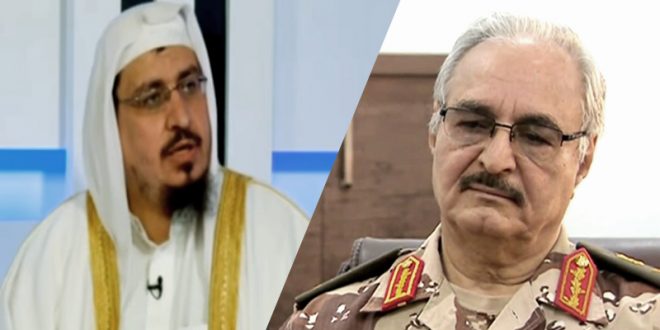 A Telephone conversation between the Saudi radical cleric, Osama Ataya Al-Otaibi, and commander of Dignity Operation, warlord Khalifa Haftar, has shown the interference and influence of extremists on Khalifa Haftar and their powers to master his self-styled army.

In the conversation, which was posted on some Salafi discussion forums, Al-Otaibi instructed Khalifa Haftar to preserve “Muslims and Salafists’ blood” and to “protect himself”. He also ordered him to coordinate with what he referred to as “the brothers in Zintan and the fighting Salafist groups in all over Libya.”

“There is an important thing; the flag you raise should be clear; you should focus on supporting the real Islam that is followed by our Salafist brothers.” Al-Otaibi outlines while Haftar was mumbling “yes, sure.”

He also reminded him that the aim of his Dignity Operation is to restore the country’s prestige, which, according to Al-Otaibi, was spoiled by “the Muslim Brotherhood and the Khawarij.”

Al-Otaibi also advised him to renounce “democracy” and focus only on supporting “the flag of Islam.” He also instructed him to hand over offices of the Awqaf and Islamic Affairs Authority to the Salafists in order to “guide the people to the religion of Allah.”

Khalifa Haftar recalled to Al-Otaibi some of Libya’s history, saying the Libyans “fought the Turks and the Italians” to defend their religion and territory until they got their independence.

“They were fighting only for the sake of their religion,” Haftar claimed, assuring Al-Otaibi that he would follow in their footsteps.

Haftar conferred with Al-Otaibi over his instruction to renounce “democracy”, asking him to help him define it.

“My definition of democracy; maybe you can help me in this; as you know I lived in the USA; we don’t need to follow them. We saw the democracy there, it is fit for them, but it differs from one country to another. Our country is a Muslim one; we should apply our Islamic teachings in everything.” Haftar stated.

Al-Otaibi also gave Haftar what he called “three very important recommendations. He urged him to “bring some Salafists and clerics closer to him in order to provide him with Sharia advice”, and to work for “pleasing Allah and keeping away from sins.”

“The third thing, I want you to strengthen your relation with Zintan, so that you hit your enemy with one hand to accelerate your victory.” Al-Otaibi said, revealing that he has a strong relationship with some leaders of armed groups in Zintan.

Haftar said it was heartening to hear Al-Otaibi’s recommendations, asking him to send them to the Zintani leaders as well, which he promised to do so.

“Please don’t give up sending me any advice any day.” Haftar called on Al-Otaibi.

Al-Otaibi went on further and informed Haftar that he had written a religious article to raise the spirits and morale of his military personnel and he would send it to him soon for distribution, reminding him that he and his forces are in “Jihad.”

“We hope if you can record this religious article in an audio file,” Haftar asked Al-Otaibi, who promised to do that.

“Great, your audio article will be distributed to all personnel and they will all hear it.” Haftar responded.

Al-Otaibi also suggested forming a temporary military council under the leadership of Khalifa Haftar to pave the way for the establishment of a qualified regular army.

The date of the telephone conversation could not be verified

Al-Otaibi is a Saudi Arabian cleric of Palestinian descent and a former Jihadist in Afghanistan. He is well-known for his strict and extremist views and misinterpretations of Islamic teachings. He is notorious for his bloody Fatwas and incitement of tensions in Libya, Yemen, Egypt and Syria.

In February 2017, he was given a red carpet treatment by Dignity Operation in eastern Libya where he held several religious lectures and delivered Friday sermons at mosques during his month-long visit.