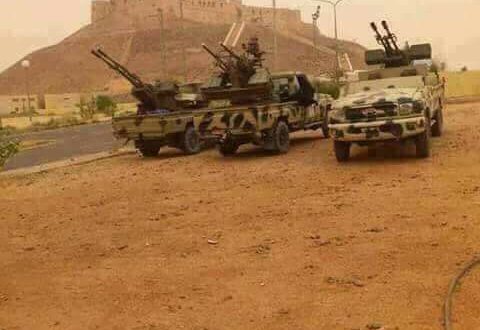 Fresh clashes broke out in the southern Libyan city of Sabha on Wednesday, killing one person and injuring four others.

The Sabha medical center received one body and four wounded people from the clashes in Sabha, Osama Al-Wafi, the spokesman for center said.

Al-Wafi also confirmed that the center was hit by indiscriminate shelling.

“One mortar and other shells fell on the center and caused the injury of one nurse and caused also a lot of materia damage.” Al-Wafi told the press.

Sabha has been experiencing an unrest and continued clashes between two tribes: Tubu and Awlad Sulaiman, with the mayor escalating the issue on the media and saying it is a foreign occupation that is taking place in Sabha.

Mayor Hamed Al-Kahyali told Libyan local media that what has been going on in Sabha and the south in general is a foreign occupation and all Libyan authorities must intervene to save Libya.

“There are Chadian and Sudanese fighters with their flags on attacking the Libyan Defence Ministry’s Sixth Brigade in Sabha and they aim to control the city and the entire south.” Al-Khayali explained.

The Libyan National Human Rights Commission confirmed Monday that over four civilians were killed and several others were injured in the armed clashes between tribes in the southern Libyan city of Sabha.