Home / Normal / UN team: UAE is developing its air base in eastern Libya 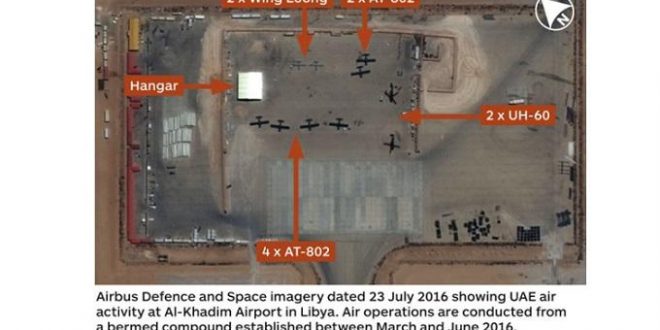 UN team: UAE is developing its air base in eastern Libya

A United Nations team of experts said they have documented operations at a base run by the United Arab Emirates in eastern Libya.

According to the report the team of experts has issued, Al-Khadim military base which is managed by UAE forces, near the city of Marj in eastern Libya, has witnessed a remarkable development during the period from March 2017 to November of the same year, according to satellite images which have been annexed to the report.

The report confirmed that the size of the southern aircrafts’ apron has doubled, with the paving of the side ground of the airport between two maintenance hangars, in about eight months.

In late 2016, a British website specialising in military matters said the UAE had established an advanced military base in the city of Marj (100 km in east of Benghazi), from which light AT-802 attack aircrafts and drones take off.

The base, which was established during the rule of former Libyan President Muammar Gaddafi, has an approximate area of 10 square kilometres. It contains several aircrafts, including two Antonov aircrafts, spy aircrafts and marching aircrafts, which are believed to have taken part in the military operations against the city of Benghazi and its Revolutionary Council.

Earlier, the British website Middle East Eye revealed a series of leaked recordings confirming the involvement of the UAE Air Force in carrying out air strikes in Libya in support of Haftar against his rival armed groups in the East of the country.

On the other hand, the report referred to the visit of the retired Major General Khalifa Haftar to Tunisia on September 2017, saying that he went on a Falcon 900 airplane, owned by a UAE-based company, named Sonning International Group, which is operated by the Dubai-based company Golden Eagle, but registered in the Dutch Caribbean islands.

According to the report, the members of the protection of Haftar were heavily armed with a huge number of weapons during his visit to meet with the Tunisian President Beji Caid Essebsi. A team of specialists analysed the pictures and videos published by the information office of Operation Dignity and revealed the existence of about thirty self-loading rifles, two precise grenade launchers, more than 30 9-mm pistols and one hand-made anti-explosive device that were mounted on the roof of Haftar’s car, which is a major violation of the arms embargo imposed on Libya.

In April 2017, the UAE called for lifting the imposed arms embargo on Libya to facilitate the functions of what it described as “the army in the fight against terrorism”, asserting (Abu Dhabi) that “standing alongside Haftar is a right choice which goes in line with the international community’s goal in the war on terrorism.” This came during a meeting between a high-profile US figure with Khalifa Haftar, under a UAE mediation, in Abu Dhabi, during the latter’s visit to the UAE.

The UAE has emerged as a political and military supporter of Haftar in Libya since early 2015, despite the fact that it welcomed the peace agreement that the Libyan parties reached and that led to the formation of a national unity government.

Haftar, just like Mohammed bin Zayed, is known for his antagonism to political Islam. He is also known for his extensive history in coups, including the coup that brought Muammar Gaddafi to power in Libya in 1969, before later on trying to coup against him in more than one occasion.

Since a popular uprising overthrew Colonel Muammar Gaddafi in 2011, several armed factions have been fighting in Libya, and three governments are now competing on governance and legitimacy.

Two of these governments are in the capital Tripoli (West), namely the internationally-recognized Government of National Accord and the National Salvation Government, in addition to the interim government in the city of Bayda (East), emanating from the House of Representatives in Tobruk, affiliated with the forces of Khalifa Haftar.