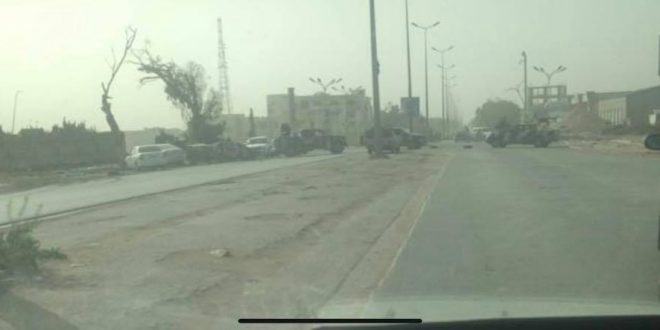 Gunmen from Saiqa Force blocked a number of main roads in east and west Benghazi including airport road, in addition to burning tires in areas blocked since Monday, eyewitnesses reported.

The reasons for the riots by Saiqa Force are not known yet, however, some sources said they are likely in protest of the detention of some Saiqa leaders such as Mahmoud Al-Werfalli, who is wanted for war crimes by the International Criminal Court, or the news about placing Saiqa commander Wanis Bukhamada under house arrest.

Meanwhile, pro-Haftar Tariq Bin Ziyad Brigade conducted detentions of many Saiqa fighters on Monday, especially those who were part of the riots against Haftar lately.

Telecommunications went down in Benghazi after the detentions campaign and residents believe that the move is connected to the protests as such an act has been reported more than once over protests or bombings.

In the meantime, Saiqa Force, security operations room and Haftar’s general command did not issue any official clarification for the incident or the loss of telecom signals.

This is the third time gunmen loyal to Dignity Operation block Benghazi roads as on February 07 they closed the streets and burnt tires calling for the release of Al-Werfalli, who then handed himself over to Haftar’s command in Al-Marij town for investigation into his war crimes.

On February 19, armed group in Benghazi also closed the roads in south and east of the city and eyewitnesses said the protesters – civilians and Saiqa Force fighters – held slogans against Haftar in protest of the dismissal of Wanis Bukhamada from his post as the commander of military operations room in Benghazi.

Haftar sacked Bukhamada in mid-February and appointed Abdelrazik Al-Nathori – the now chief of staff – in his place, with a statement by Saiqa Force spokesman justifying the move as appointing Bukhamada in Derna frontline, where a number of Saiqa Force brigades were tasked to go.