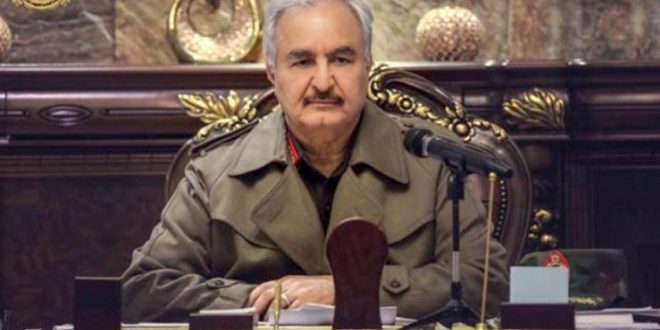 The forces of Khalifa Haftar, who is backed by the Libyan House of Representatives in Tobruk, have given Africans in the south of the country nine days to leave it.

This ultimatum was issued on Thursday, and came  in the context of armed clashes in the city of Sabha (750 km to the south of the capital, Tripoli). The statement stated that the conflict is between internationally-recognised Government of National Accord and the forces of Haftar insist that “foreign mercenaries” are involved.

The statement called on “Expatriates from neighbouring African countries must not be engaged with outlaw militias and their exploitation to destabilise the security and stability of the south.” The statement did not  mentioned any specific country.

The statement demanded that “Africans should immediately leave Libyan territory and return to their countries.”

The statement informed them that 17 March is the deadline for their presence on Libyan territory.”

Haftar’s forces have threatened to use force to expel the African fighters “by all available military air and land means,” if they fail to meet the deadline.

The forces of Haftar and others affiliated to the Government of National Accord are spread in the region.

Last Saturday, the city council in Sabha (affiliated the Libyan Government of National Accord), announced that about 120 families from Al-Tayuri neighbourhood were displaced from their homes as a result of the clashes taking place in the city.

The mayor of Sabha, Hamed Rafa Al-Khayali, had told Anadolu News Agency earlier, “there is coordination on the ground at the brigade level between the forces of Haftar and the forces of the Government of National Accord. They will comb the area in order to determine the targets and places of concentration of foreign armed groups.”

Since 25 February, sporadic clashes have been taking place in Sabha between parties and there have been conflicting reports about them, as there are those who considered them to be tribal confrontations between “Toubou” and “Ouled Slimane” and those who deny this and assert that they are battles between the Libyan Army and foreign forces, in reference to armed Chadian groups.