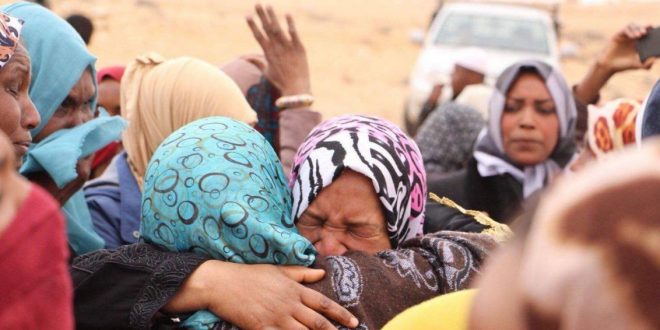 On Feb. 1, around 600 families headed back toward their hometown of Tawergha, located southeast of the Libyan coastal city of Misrata. They’d been forced to leave the town of 40,000 seven years ago following battles in which fighters from Tawergha were accused of having fought for the former Libyan regime and raping women in Misrata.

A reconciliation agreement was struck Dec. 26, 2017, between representatives of Misrata and Tawergha, under the auspices of Prime Minister Fayez al-Sarraj, the head of Libya’s Government of National Accord (GNA). It called for the Tawergha people to be permitted to return to their hometown from various camps in Benghazi, Tripoli, Bani Walid, Tarhuna and Ajdabiya and for the affected people from both sides to be compensated.

But about 30 kilometers (18.6 miles) from their goal, armed men from Misrata blocked the road and prevented the returnees from continuing their journey. They were forced to stop and camp outside Qararat Qatif, and thus began another miserable chapter for the Tawergha families.

Al-Monitor contacted people stuck at the Qararat Qatif camp. Hassan Othman Hassan told Al-Monitor, “We are living in a very bad situation. I am married with two children, but I could not get a tent to stay in. We are sleeping in the open and sometimes in the other families’ cars. We are impatiently waiting to return home.”

Salima al-Ghariyani told Al-Monitor, “We were waiting to be allowed to go home, but the armed men killed our dream with their bullets. After leaving our old camp, my son, my husband and I found ourselves stuck in a new one. The conditions here are worse, as we don’t have sanitary facilities, beds or sheets. We are preparing food on wood fires.”

Amal Barka told Al-Monitor, “Our situation is psychologically distressing and very difficult to cope with. Imagine waiting for the evening to walk to an area far from the camp to use as a latrine.”

The Tawergha ordeal dates back to August 2011, when armed men from Misrata forced Tawergha fighters out of the town before looting and burning many houses and shops there, displacing its residents in retaliation for the crimes committed against women in Misrata. Although no one has been convicted of the rapes, the Misrata municipality claims it has incriminating video evidence that will be shared only with investigators. The International Criminal Court’s chief prosecutor at the time, Luis Ocampo, said in 2012 that he intended to investigate the matter, but the investigation was never initiated.

In November 2011, I went on a reporting trip to Libya and visited the ghost town of Tawergha. I was not allowed to enter and take pictures, and armed men asked me to leave. I headed to Misrata and asked for evidence that men from Tawergha committed the rapes they are accused of. They brought me two prisoners from Tawergha who had confessed to rape. No other evidence was offered, and their accounts given in the presence of the guards could easily have been coerced.

In early 2015, representatives from Misrata and Tawergha started meeting in Tripoli with mediation by Youssef al-Zarzah, who became the head of a dialogue and reconciliation committee. Meetings between the two sides continued until an agreement was signed in Tunisia Aug. 31, 2016. The agreement called for compensation for the affected families, for justice to be brought to those accused of crimes and for the reconstruction of damaged property in Tawergha and the affected outskirts of Misrata.

The agreement was not official until June 19, 2017, when Sarraj signed off on it and instructed that the necessary security measures be taken to facilitate the families’ return to their hometown. On Dec. 26, 2017, Sarraj announced that the Tawergha families would return home starting in February 2018.

Why then were the people of Tawergha not allowed back to their hometown?

Zarzah told Al-Monitor, “A limited number of Tawergha people were supposed to go back to their hometown over several phases” coordinated by committees from both towns and after notifying the security authorities. “But we were surprised by a larger number of up to 10,000 people.”

Former judge and current political analyst from Misrata Ahmad al-Riwayati sees things differently. He told Al-Monitor, “The core of the problem is a small group from Misrata that does not want a successful reconciliation agreement.” Riwayati said this “extremist” group is linked to Dar al-Ifta, explaining, “This group seeks to delay the return of Tawergha’s displaced and exchange them for [the return of] the Benghazi displaced,” in reference to the Benghazi Defense Brigade that fought against the Libyan National Army, led by Gen. Khalifa Hifter.

The head of Tawergha’s local council, Abdul Rahman Al-Shakshak, told Al-Monitor, “The people are determined to go back to their hometown. They will remain in the camp, [sleeping in] the open, until the road is unblocked.” He went on, “The agreement was clear about the return, and the prime minister himself stated it. Of the compensation funds promised by the GNA to those affected, 25% have been earmarked for a first payment. Funds were granted to the Ministry of the Interior, the Ministry of Local Government and pro-government forces in the central region to facilitate the return.”

Shakshak added, “I visited UN special envoy to Libya Ghassan Salame and Sarraj, who affirmed that they are currently pressuring the leaders in Misrata to implement the agreement and end the people’s suffering.”

The people of Tawergha who are stuck in their new camp have been protesting the unbearable living conditions on an almost daily basis while prominent tribal figures and sheikhs work to pressure Misrata officials and the GNA to resolve the situation. On Feb. 27, 2017, the UN mission in Libya spoke in favor of allowing the Tawergha to return to their city, noting that people must not be held prisoner to political conflicts. On Feb. 16, 2018, Human Rights Watch called on the International Criminal Court to investigate possible crimes against humanity in Tawergha.

The pressure on Misrata to end the suffering of the Tawergha people is mounting, and many feel it is only a matter of time and logistics before the roads are opened for people to return home, thus ending one of the greatest ongoing tragedies in Libya.