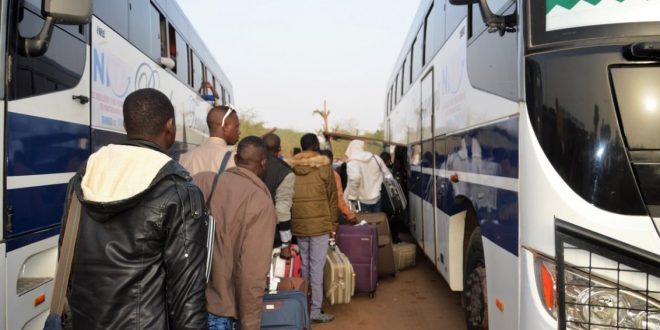 IOM, the UN Migration Agency, announced today (13/03) that it has assisted 10,171 migrants to return home safely from Libya with support from the European Union, African Union, and the Libyan Government since the scale up of Voluntary Humanitarian Return (VHR) from the country started on 28 November last year. Another 5,200 migrants have returned with the support of African Union member states in the same period. Some 23,302 migrants have returned through IOM’s VHR programme since January 2017.

“We are continuing to assist migrants inside Libyan detention centres, while increasing efforts to reach stranded migrants outside of detention,” said Othman Belbeisi, IOM Libya Chief of Mission.

“Since the expansion of our VHR operation, the number of migrants in official detention centres have dropped from an estimated 20,000 people in October 2017 to 4,000 people today, a five-fold decrease. IOM in Libya is also working with the authorities to register migrants, provide lifesaving assistance in the form of health care and essential aid items, psychosocial support, improve consular services and projects promoting community stabilization,” said Belbeisi.

Nearly half of voluntary humanitarian returns carried out by IOM from Libya are part of a larger EU-IOM initiative to protect and assist migrants in need not only in Libya but in 26 countries along the Central Mediterranean Route. This includes crucial support for reintegration of returnees in countries of origin.

Launched in December 2016, with additional funding from Germany and Italy through the European Union Emergency Trust Fund for Africa (EUTF), the EU-IOM Joint Initiative on Migrant Protection and Reintegration is active in Libya and countries in North Africa, the Sahel and Lake Chad region, and the Horn of Africa.

Together with its partners, IOM has been scaling up activities in countries of origin to meet the surge in returns from Libya and ensure that returning migrants receive appropriate assistance upon arrival as well as longer-term support to adjust to life and re-establish themselves in their communities.  Reintegration assistance is also available through the programme for those assisted to return from European Union member states.

IOM Regional Director for the EU, Eugenio Ambrosi, said that the huge protection needs and the scale of returns in the last few months under the VHR operation have overtaken initial planning and pose some additional challenges for countries of origin.  He cautioned that the reintegration process is complex and requires time.

“We are embarking on a completely new approach to reintegration and we believe in it. It will take some time to build, and in cooperation with authorities in countries of origin and the local communities, we are already seeing promising developments,” said Ambrosi.

“The Joint Initiative, in partnership with the governments of countries of origin and the African Union, aims to make sure that the migration process is safer, and that returning migrants can get back to their countries of origin safely and re-establish their lives without the feeling that they are a burden for their communities and families,” said IOM Regional Director for West Africa, Richard Danziger.

He cautioned, however, that many returnees from Libya are traumatized after having suffered unspeakable abuses, and so their immediate medical and psychosocial needs have taken priority.

The new, integrated approach to reintegration combines support for returning migrants and their home communities. It aims to mitigate possible tensions at home for returnees by involving local communities in the reintegration process and raising awareness to address potential stigma of return. For this reason, capacity building, systems strengthening, social, psychosocial, and community-based aspects are being built into the programme.

Monitoring and evaluation of reintegration activities are also part of the programme’s approach to measure impact and identify good practices to build on.

IOM believes that this innovative approach also has the potential to complement local development, particularly in how it is designed to respond to the socio-economic priorities identified by local authorities, migrants and their communities.

“The initiatives we are undertaking with the EU and our African partners represent a new chapter in migration cooperation. It is the first time that substantial funding has been invested to support the priorities and capacity of partner countries to manage return and reintegration and to make migration itself a safer and informed process,” said Ambrosi.

While the VHR programme is not new and IOM has been supporting migrants to return since 2006, the scale-up was launched on November 28th, 2017 when the African Union, European Union and the United Nations came together at the AU-EU Summit in Abidjan to respond to reports of slavery and migrant abuse in Libya.

A tripartite AU-EU-UN taskforce was established with the objective of saving and protecting lives of migrants and refugees along the routes and, in particular, inside Libya, as well as to accelerate the assisted voluntary returns to countries of origin and the resettlement of those in need of international protection for a period of six months (ending 30th May 2018).

The immediate focus of the Task Force was the voluntary repatriation, within six weeks, of at least 15,000 migrants identified in Government-controlled detention centers through the European Union Trust Fund. The joint work of the task force has been instrumental in addressing a number of challenges faced in the evacuation of migrants including: timely issuance of exit visas, granting landing rights to non-Libyan airlines and provision of documentation/consular services for migrants to enable their return.

The EU Trust Fund is backing the EU-IOM Joint Initiative for Migrant Protection and Reintegration to facilitate orderly, safe, regular and responsible migration management through the development of rights-based, development-focused, and return and sustainable reintegration policies and processes.