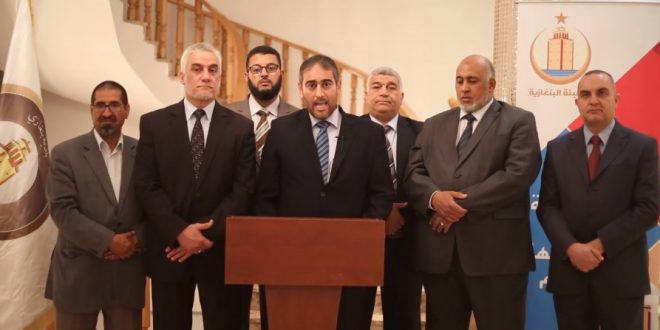 Benghazi Commission -a working group set up to deal with the affairs of the displaced people of Benghazi- denounced the arrival of a number of unelected mayors of the eastern region in Tripoli to participate in the second meeting of Libyan municipalities.

In a statement Sunday, the Commission expressed its deep concern over welcoming mayors appointed by the military governor of the eastern region, Abdul Razek al-Nadori in Tripoli, considering the step as a serious development and a clear violation of democracy.

It called Benghazi activists in the western region for an emergency meeting to discuss the matter.

It also called for a protest in Tripoli on Monday to show rejection to their participation in the meeting.

Meanwhile, the elected Municipal Council of Benghazi, currently working from Tripoli, condemned the participation of the military-appointed mayor, Abdul-Rahman Abbar, in the meeting, describing him as “the usurper of power.”

It urged on the Presidential Council and the High Council of State not to deal with those mayors, calling for respecting ballot boxes the peaceful hand over of power.

A group of around 30 unelected mayors took part in the second meeting of Libyan municipalities at Radisson Blu Hotel on Sunday.

The participants stressed the need for unity and addressing the ongoing financial crisis.

The first meeting was held in Shahhat town in east Libya earlier this year.