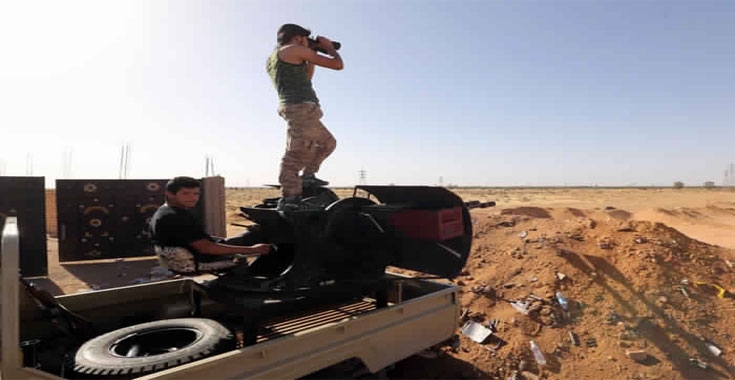 A move yesterday by what have been labelled as ‘‘Zintani forces’’ led by Emad Trabilsi to take over control of the 27 km checkpoint on the main Tripoli-Zawia coastal road was branded as unlawful. The vehicles involved in checkpoint takeover were marked Special Operations Force.

The road has been the focus of much political tug-of-war often used as an instrument of political leverage by the Wershefana tribes based to the south of the coastal road who are deemed pro Qaddafi supporters and see themselves as having been marginalized since 2011.

The move was labelled unlawful by Tripoli-based forces in an unofficial statement circulating on social media. The statement has no official headed paper, stamps or signatures.

There is much speculation as to the real motives behind the move. It is not clear if it was sanctioned by Faiez Serraj or by Osama Juwaili, the former Defence Minister and Serraj’s Western Region Military Commander.

Juwaili and Trabulsi had operated together last November in a what was thought to be a joint LNA-Presidency Council military operation sanctioned by Serraj – to attack ‘‘Qaddafi supporters and criminal’’ in the Wershafana region.

Some labelled the move as a spoiler move against reports of the Libyan army reunification talks reported to be nearing an agreement in Cairo.

Others saw it simply as a naked power play by Emad Trabulsi in an attempt to force himself back into the political equation after having been ejected together with his Zintani forces from Tripoli in the 2014 Libya Dawn clashes.

At the time of writing there has been no official comment from Faiez Serraj or any of the members of the Presidency Council.