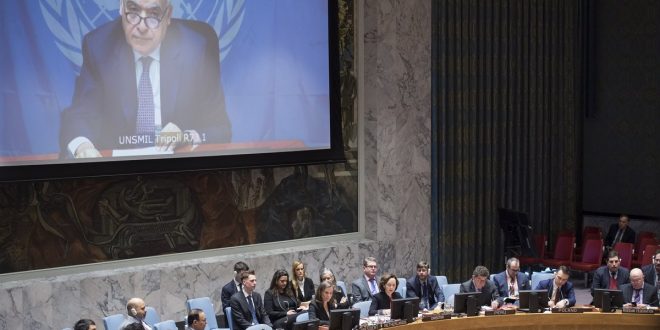 The UN envoy to Libya, Ghassan Salame, briefed Wednesday the Security Council on Libyan latest developments, revealing that there is little chance for amending the Libyan Political Agreement (LPA).

“I asked the concerned parties, when I first was appointed as Head of the UNSMIL, to place the LPA in my action plan that I proposed to re-stabilize Libya. I think there remains little hope that such amendments can happen.” Salame explained.

He also said that the closer Libyan marches toward elections the less important the LPA amendments become, saying he will attempt Thursday to give it a last shot and ask the joint amendment committee to have their final say about the proposed modifications.

“Free and fair elections before 2018 ends is the aim of the UN. We shall make sure before Libya goes into elections that they would be comprehensive and inclusive of all parties and their results will be accepted by all.” Salame told The UN Security Council via conference video.

“The UNSMIL is proud to have relocated to Tripoli. It is very significant.” He added, saying security and economic conditions in Libya beg for speeding up the political process, so Libya can be a united state that can fight threats of armed militias and terrorist groups.

He also said that 300.000 Libyans are living in misery and the UN wants to return them, especially Tawerghans who cannot go back to their houses, citing fight in southern Libya, where he said many were killed in Sabha fight.

“Poverty is continuing and middle class Libyans are sending their children to work. The government is unable to provide services to the people in weak financial conditions despite the fact that the country is producing a million bpd of oil. Concern is still rising on the threats of IS and Al-Qaeda which are still conducting hit-and-run attacks, while bodies are being found in different places, including Tripoli.” Salame went on.

He said the UNSMIL will open its Benghazi office once the situation in there allows, adding that another office in the south will be reopened.