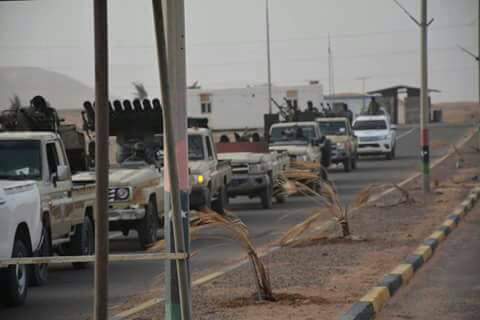 The LNA forces’ arrival also coincides with the arrival of the Faiez Serraj Presidential Council’s committee in the south.

Tamenhint airbase is located 34 km from the southern regional capital Sebha, 769 km from the Libyan capital Tripoli and 1,146 km from Benghazi.

The airbase was re-taken by the LNA on 25 May 2017 after the Misratan-led Third Force withdrew from the area after the controversial massacre at the Brak Al-Shatti airbase in which dozens of LNA soldiers were killed. However, Taminhent remained under LNA-aligned forces from nearby towns and was used strictly for emergencies.

The Committee’s plane took off back to Tripoli from the Sharara oilfield loaded with tens of injured and students. The Committee is trying to broker a sustained ceasefire deal and has been approaching disaffected parties through humanitarian channels.

According to the Sebha health services office, some 4,500 people were forced to flee from mainly the Tayouri and Nassiriya districts of Sebha who were forced to seek shelter in schools at the Manshiya district.

An initial proposal is to clear the city from militia presence and weapons, especially residential areas where most of clashes are believed to have taken place. This will then be followed by work on strengthening and reactivating police departments and reorganising army units within the town.

It will be noted that the Tarik Ben Zeyad brigade is one of two powerful Salafist brigades aligned to the LNA, who alongside the Tawhid brigades, took part in the fighting against Benghazi Revolutionary Shura Council (BRSC) in the Benghazi district of Sabri. Abdul Fateh Ben Ghalboun, is another Salafist commander in charge of the Tawhid brigade in Benghazi and operating under the Saiqa Special Forces.