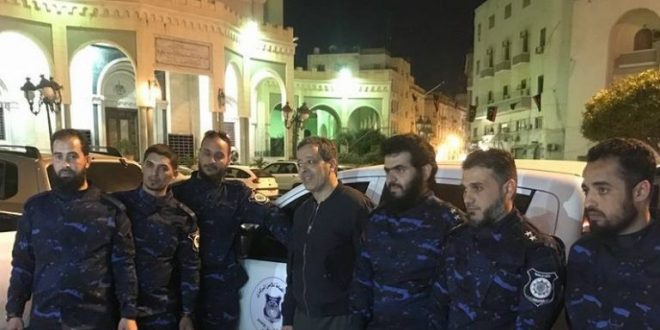 The head of Tripoli Central Municipality Council, Abdulrauf  Beitelmal was released late last night after being held in forced captivity for about 21 hours. No official news of the identity of his kidnappers or their motives for his kidnapping have been revealed yet. Sources have informed Libya Herald that he is in good health.

His family thanked the efforts by the Faiez Serraj-led Presidency Council for its behind the scenes efforts in helping release him. Faiez Serraj is a personal friend of Abdulrauf Beitelmal.

It will be recalled that he was kidnapped from his home in the Khalat Al-Furjan area, in the south of Tripoli, by unknown militias just after Midnight Thursday. The armed militias were reported by family members to have used force and to have beaten his son with the but of a Kalashnikov rifle.

There is still confusion as to whether he was kidnapped by unlawful militias or that he had indeed been ‘‘arrested” by nominally official security forces on instructions of the Public Prosecutor’s / Attorney General’s Office (PPO/AG) for ‘‘questioning” on the mis-spending council money.

Another version of events is that the ‘‘on the instructions of the PPO/AG’s Office for questioning’’ story is a retrospective fig-leaf of a cover story imposed by his kidnapping militias to save face and avoid prosecution.

Sources close to Abdulrauf Beitelmal at Tripoli Municipality, however, have told Libya Herald that his kidnapping is linked to his recent efforts to clear the coastal road and beaches from unlicenced and illegal kiosks, shops, fish restaurants etc.

Whilst many of these enterprises, though unlicenced, are genuine business ventures, a number are allegedly no-more than brothels and fronts for the sale of alcohol, drugs.

It is believed that the militias that kidnapped Abdulrauf Beitelmal were vested interests who were negatively affected by his urban clearance campaign.

Having committed their act of kidnapping, faced with a huge public outcry to identify his kidnappers and for his release, it is reported that the militias coerced the PP/AG’s Office into retrospectively formalizing the deed by saying that they had ordered his arrest from his home just after midnight. The Presidency Council has yet to make any official statement on the matter.

Whatever the truth is, the incident represents a microcosm of life across Libya and symbolizes the legitimacy, political and security situation in Libya and especially the paradoxical relationship between (semi) legitimate state institutions and the all-powerful militias.

This inconsistent relationship was summarised by the SRSG and UNSMIL head Ghassan Salame in his  latest report to the Security Council early this month when he noted that ‘‘Armed groups, including those formally integrated into the state structures, continue to operate outside of the law, perpetrating human rights abuses.  Bodies bearing signs of torture have turned up in many locations. Libyan men, women and children are increasingly kidnapped for profit, even in the heart of the Capital. Citizens are arbitrarily arrested by shadowy security forces. People are held and abused in unofficial, official or quasi-official detention prisons.’’

He also added that ‘‘At the heart of Libya’s problems is an economic system of predation. It degrades the life of the ordinary Libyan and serves the interests of the powerful. It is the main obstacle to the political process and cements the status quo’’.