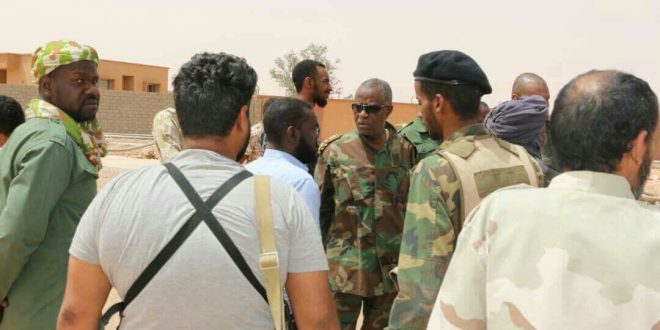 The Sebha-based 6th Infantry Brigade declared a unilateral ceasefire and re-assured its allegiance to the Khalifa Hafter-led Libyan National Army (LNA). In its statement issued yesterday, the 6th Infantry Brigade also stressed that it will “defend itself” against any attacks from those it described as “outlaws and criminal gangs”.

The statement comes as the House of Representatives declares an emergency today in the south of Libya.

The Gortha agriculture road is a main road that connects Sebha to southern municipalities and villages. Its closure had worsened living conditions and caused shortages in fuel and food supplies.

It will be recalled that fighting broke out in Sebha in early February this year between Tebus and Awlad Sulieman which led to acts of retribution and to the death of Tebu civil activist at Nassiriya Cafe in Sebha.

Initial peace efforts that were conducted by Tebu and Awlad Sulieman elders in Sebha proved unsuccessful. A number of reconciliation delegates followed from eastern Libya, the Libya Reconciliation Council of Elders, Zintan and finally the Presidency Council-formed Ceasefire Committee. However, they have all failed to broker a ceasefire and prevent the sporadic breakout of fighting or gunfire.

Libya’s political split is not helping the situation in the south as both Tripoli and Tobruk engage in separate reconciliation and military efforts – often pulling in opposite directions. The LNA had launched its  “Law enforcement” operation on 19 March in reaction to the ongoing fighting in the south of Libya with its Air Force targeting Chadian militias in the region.

Monday’s statement was signed by Brigadier Khalifa Abdulhafeed Khalifa Omar who had been appointed by Hafter to replace Brigadier Ihmied Mohammed Salim Al Ataibi following the latter’s rejection of the LNA in March and his declared allegiance to the Serraj-led Presidency Council’s Ministry of Defence instead.

Awlad Sulieman tribe who make-up the large part of the 6th Infantry Brigade accuses the Tebus of harbouring “Chadian Tebus” and attempting to take control of Sebha, while Tebus deny these accusations and refuse to recognise the 6th Infantary Brigade as being representative of the army in Sebha.

There was also a major protest of southern municipalities on Monday evening, including Sebha, Brak Shati and Ubari, demanding an end to the fighting in Sebha that has had a knock-on effect on their daily life; food and fuel shortages, blocked roads and an increase in theft and hijack.

Awlad Sulieman and Tebus previously signed a peace agreement on 30 March 2017, although discontent quietly spread among many Sebha residents who did not receive compensation for their losses caused by the fighting. There is a perception by some in the south that such funds have been made available by the Italian government.

However, others attribute the Sebha violence to the simmering tensions caused by the political polarization between the Libyan stakeholders in the north, while others attribute it to the effect of foreign infiltration and activities of extremist groups in the area.

According to Sebha Medical Administration Office, the fighting forced some 4,000 people to flee from their Tayouri and Nasiriya neighbourhoods to seek shelter in public schools at Manshiya and other places inside the town.

Sebha Medical Centre, located near the clash zone and inaccessible for Tebus, was also reportedly hit by shells and bullets, although it remains in operational with the death toll rising up to 12 deaths and with over 30 wounded. Sebha’s Italian-era fortress was also seriously damaged by heavy artillery shells.

Sebha, the principal town and capital of southern Libya’s historical Fezzan region is suffering severe shortages in essential necessities with large parts of the town remaining virtually inaccessible to civilians.