Home / Normal / Libyan spokesman: No comment on reports of key commander being treated in Paris 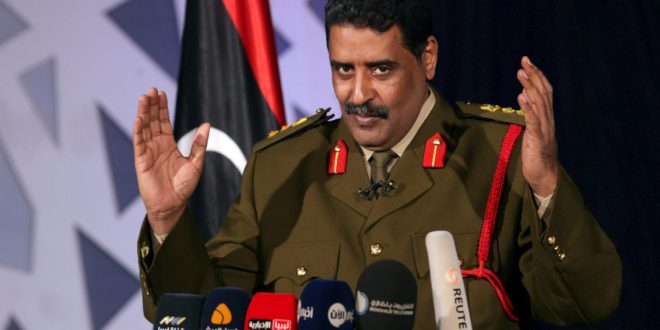 Libyan spokesman: No comment on reports of key commander being treated in Paris

Ahmed al-Mismari, spokesman for the Libyan National Army (LNA) that Haftar leads, gave a press statement in the eastern city of Benghazi late on Wednesday, after more than 24 hours of conflicting rumours and reports about Haftar’s health and whereabouts.

One high-ranking East Libyan military source told Reuters on Tuesday that Haftar had been flown to Jordan, and would travel on from there to a third country for treatment for a critical health condition.

A second source close the East Libyan military command said on Wednesday that Haftar was in France, but gave no details on his condition. Both sources asked not to be named because of the sensitivity of the issue.

Libya’s 218 TV channel, which is supportive of the LNA, reported that Haftar “was undergoing a medical inspection in Paris and that there was no real danger to his health”.

Several French media also reported that Haftar was being treated at a Paris hospital.

Mismari spoke about the military situation in the eastern city of Derna, which the LNA has encircled, and took no questions.

He also made a general comment about “lies and rumours” which he said were spread by the Muslim Brotherhood and aimed at undermining the LNA. It was not clear if the comment was a reference to reports about Haftar’s health.

Haftar, 75, has for several years been the dominant figure in Eastern Libya, and has widely been seen as seeking national power in the oil-rich nation of six million.

He has presented himself as a scourge of Islamist militancy, taking a hardline stance against the Muslim Brotherhood, mirroring the position of Egyptian President Abdel Fattah al-Sisi, a Haftar ally.

Critics, however, accuse Haftar of fuelling armed conflict in Libya.

Haftar is aligned with a parliament and government that moved to Eastern Libya after a major escalation of fighting in the capital, Tripoli, in 2014.

He has spurned the internationally recognised Government of National Accord (GNA), which arrived in Tripoli in 2016 as part of United Nations-led efforts to reunify the country.

Security Forces
All
2018-04-12
asaeid
Previous Libyan strongman Khalifa Haftar in coma after stroke: reports
Next A Libyan Strongman Looks to Washington, but a Health Crisis Looms