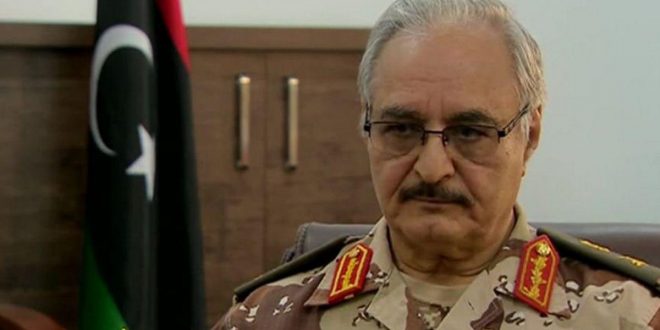 East Libya military commander Khalifa Haftar is in an almost vegetative state and “will never be normal again” because of his health issues, an informed source told Middle East Eye.

Haftar is suffering from lung cancer, which has metastasised to his brain, according to a European diplomat.

“He is unable to talk or even fully comprehend. He can not even sit or stand up,” said the source, who wished to remain anonymous.

“The doctor treating him says that even if he responds partially to treatment, it will be temporarily and he will never be normal again.”

The diplomat added that Haftar’s aides tried to organise a media appearance for him to put to rest news about his failing health, but the arrangement was cancelled because he is in “very bad shape”.

Conflicting reports have been swirling around Haftar’s health since it was reported earlier this month that he is receiving treatment in Paris for a serious condition.

Officials in his Libyan National Army (LNA) have repeatedly insisted that Haftar is in good health and merely undergoing routine medical checkups in France.

A doctor, who wished to remain anonymous, said Haftar’s condition resembles a stroke, and it is irreversible.

“There are drugs that can be administered to reduce the swelling in the brain, which could give Haftar back the power of speech, for instance, but these effects would be temporary,” the medical expert said.

Haftar, 75, has captured most of eastern Libya from Islamist fighters and militants. He has also been vying for power nationally, and has had his eye on the presidency in light of elections set for later this year.

His forces are aligned with east-based authorities against the Tripoli-based, internationally-recognised government.

Several Libyan media outlets reported last week that Haftar was dead. But the United Nations Support Mission in Libya appeared to quash the rumours when it said that envoy Ghassan Salame spoke to the self-styled field marshal over the phone.

MEE understands that the conversation between Salame and Haftar did not make much sense because the Libyan commander was not lucid.

The diplomat told MEE that Salame was under pressure by Italy, France and the UAE to confirm that Haftar is alive.

LNA’s foreign backers were anxious not to trigger a “war of succession” in east Libya, where many people would be vying to inherit Haftar’s power, including his son.

Analysts have predicted that Haftar’s failing health will spark a power struggle within the LNA.

On Wednesday, Abdel-Razeq Nathuri, Haftar’s military chief of staff, survived a car bomb assassination attempt that killed one person in his convoy near Benghazi.