Home / Normal / Zawiya and Zintan reconcile after years of tension 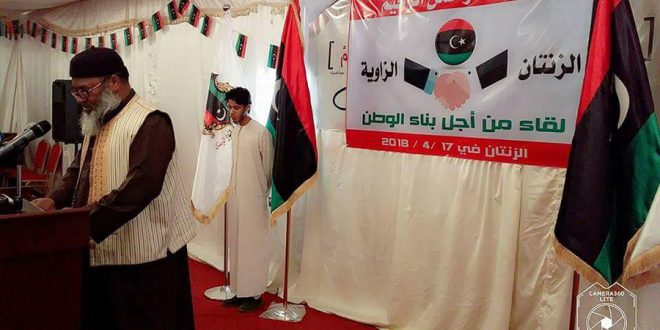 Zawiya and Zintan reconcile after years of tension

Zawiya and Zintan called on Tuesday for the formation of a joint committee to resolve the disputes between the two cities.

In a statement after their reconciliation meeting in Zintan, representatives from both cities also called for a comprehensive national reconciliation, support and unification of the military and security institutions and the need to combat extremism and organized crime.

The statement stressed the need to bring the disputing political viewpoints closer together.

A delegation from Zawiya arrived in Zintan on Tuesday to hold a reconciliation meeting between the two cities under the context of the comprehensive national reconciliation held in a number of Libyan cities.

The visit of Zawiya delegation to Zintan comes after 21 days from a similar visit by a delegation from Misrata.

Both Misrata and Zintan agreed on March 28 to end tension and reconcile for the sake of homeland.

Zintan disagreed with most of Libya’s western cities in 2014 and pledged allegiance to east Libya forces led by warlord Khalifa Haftar. Its brigades were expelled from Tripoli by then-Libya Dawn forces as a result.