Home / Normal / Haftar in ‘good health’ says brother, as he remains out of public view 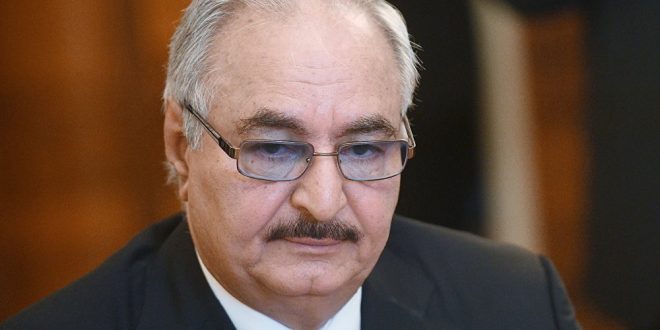 Haftar in ‘good health’ says brother, as he remains out of public view

Libyan military commander Kahlifa Haftar is in “good health”, despite rumours suggesting his condition was critical, according to his younger brother.

Omran Haftar told Egyptian magazine Rose Youssef on Tuesday that his brother had assured him of his good health in a phone conversation, allegedly also expressing plans to return to Libya soon.

“The marshal is in good health, but there are some abusers and traitors who are promoting the rumours of extremist groups,” the strongman’s brother said.

“They spread rumours surrounding the health of the marshal and publish false news about his death,” he added.

Khalifa Haftar is the leader of the self-styled Libyan National Army (LNA), whose officials have insisted its leader is undergoing routine medical treatment in France.

Guma el-Gamaty, a Libyan analyst and head of the Taghyeer party, told Middle East Eye that though Omran Haftar’s comments refute the persistent rumours surrounding his brother, they do not provide any real evidence to the contrary.

“This statement is most likely part of a disinformation campaign to hide the seriousness of Haftar’s condition,” he said, adding that it could be an attempt to subdue potential power struggles or a backlash.

Where the speculation began

Speculation about the ailing health of the military leader spread earlier this month. Al Jazeera reported on 11 April that he was in a coma at a hospital in Paris, after suffering a stroke.

MEE reported last week that the general is suffering from lung cancer, which has spread to his brain, according to a European diplomat.

“He is unable to talk or even fully comprehend. He cannot even sit or stand up,” said the source, who wished to remain anonymous.

“The doctor treating him says that even if he responds partially to treatment, it will be temporary and he will never be normal again.”

With a potentially weakened Haftar, analysts say it is an opportunity to reinvigorate the political process in the fragmented North African state, and give renewed momentum to negotiations.

Libya has been mired in a continuous state of instability since the overthrow of longtime leader Muammar Gaddafi in 2011, following a Nato-backed uprising.

With unrest roiling across the country, the internationally backed Government of National Accord (GNA) was installed in 2016 under the UN-backed Libyan Political Agreement.

Yet the peace process soon began to splutter, with Haftar refusing to cooperate with the GNA-led efforts to reunify the country and the eastern-based House of Representatives (HoR) soon following suit.

The rumour picked up steam when Egyptian journalist and MP Mustafa Bakri sent condolences in a tweet eulogising the self-styled field marshal, later tweeting that the news was actually false.

“The situation is clear, and there is no need for all this attention.”

He added that his brother was used to these kinds of rumours and no longer took notice of them.

Omran Haftar added that he had no information about the date which the general would return to Libya, but claimed that there were security preparations now taking in place in anticipation of his return.

Khalifa Haftar has failed to appear publicly since reports of his ill health emerged.

“Omran did not specify a date for his return to Libya, which may take months… Last week we heard that Haftar was returning within two days, but that never happened,” Gamaty said.

“Haftar is a very powerful figure, but his grip has, of course, loosened a lot now,” he told MEE, predicting further instability.

“Haftar’s external backers have realised that he cannot become Libya’s Sisi and that he cannot single-handedly win this war – the cost for his supporters would simply be too much,” Riccardo Fabiani, former senior Middle East analyst at Eurasia Group, told MEE, referring to Egyptian President Abdel Fattah al-Sisi.

According to Gamaty, Egypt and the United Arab Emirates will be very concerned about the impact of Haftar’s possible demise.

“They invested everything in one man,” he said.

“This changes all dynamics and balance of power in Libya,” said Gamaty, who claimed that the political process in the country was stalled, in part, because of Haftar.

Referring to the HoR in the east, he said: “They were afraid of him before… hopefully now the process can move forward.”

In recent months, Egypt has been more supportive of reconciliation efforts in the country.

“What we could see in the next months is Egypt and the UAE, and more discreetly Russia and France, increasing pressure on Haftar to soften his position and to reach a compromise with the other camp,” said Fabiani.

“I think that we are approaching a potentially new phase in Libyan politics… While this doesn’t mean that a peace agreement is now within reach, there is definitely an opening that can be exploited to inject new momentum in negotiations.”