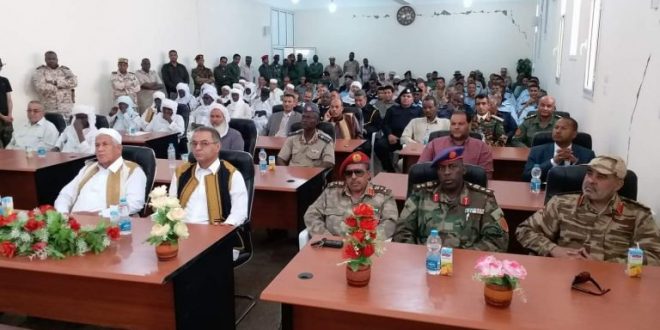 Kufra tribes gather for peace and vow support to LNA

At Kufra’s Taj Conference Hall yesterday morning, Kufra’s tribes gathered with the town’s officials, including the head of Kufra Municipality, Abdulrahman Agoub and commander of Kufra Military Zone, Brigadier Belgasim Al Abaj, to congratulate the arrival of Khalifa Hafter to Libya and to look to strengthening social cohesion and enforce security in the town.

It is almost seven years that all of Kufra’s tribal figures and officials sat on the same table stressing the necessity for peace and stability in the town, following a series of deadly communal fighting that killed and wounded hundreds of people between the Arab majority Zuwai tribe and ethnic minority of Tebus since December 2011.

During the meeting the gathered warned against “corrupt media” that aim to divide Libyans and endanger the future of the country and jeopardize national unity and togetherness.

Kufra’s Military Zone Commander, Brigadier Belgasim Al Abaj had arrived in Kufra on 16 April and held a series of meetings with the town’s tribes and elders. Al Abaj who is also from the Kufra Zuwai tribe, had been warmly received and welcomed by Tebus on 23 April at Kufra’s Tebu Gaderfay neighbourhood, where he had pledged to resolve the long Tebu-Zuwai standoff in the town.

Following this, Kufra is now experiencing a period of relative calm and ease. At least two roads which had been closed since December 2015, the Dakhiliya road and Security Directorate road being re-opened on 24 April 2018.