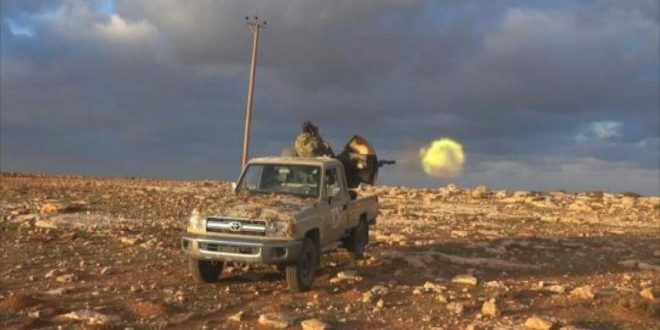 Forces under Gen. Khalifa Hiftar have started a land and air operation to wrest the eastern city of Derna from an alliance of militant armed groups, Human Rights Watch said today. All parties to the conflict are obligated to respect the laws of war and spare civilians and civilian infrastructure.

The Libyan National Army (LNA) under Hiftar’s command, has enforced a siege on the city of 150,000 since August 2016, to drive out the Derna Mujahideen Shura Council, (DMSC), an armed group with an Islamist ideology that has controlled Derna since the ouster of the Islamic State (also known as ISIS) in April 2016. The group, headed by Attia al-Shaeri, recently renamed itself the Derna Protection Force. On May 3, LNA fighters opened a ground attack south of the city, two Derna residents told Human Rights Watch by phone.

“Derna residents, suffering under a military siege for nearly two years, are bracing for a possible drawn-out battle for their city,” said Hanan Salah, senior Middle East and North Africa researcher at Human Rights Watch. “Senior commanders need to ensure fighters under their command take all feasible measures to spare civilians from harm.”

Since May 3, the fighting has extended to the eastern part of the city, including ground incursions and air strikes, mostly at night, against the armed group’s locations. There have been reports of fighters’ deaths but not civilian casualties. Hiftar said on May 3 that he had given strict orders to spare civilians, although past  statements did not prevent his forces from inflicting significant casualties on civilians and mistreating them.

Since the outbreak in 2014 of conflicts around the country, initially three, then two, rival governments have claimed legitimacy. The United Nations-backed Government of National Accord (GNA), based in Tripoli, controls parts of western Libya in addition to the capital. A rival, the Interim Government, based in the eastern cities of al-Bayda and Tobruk, controls much of eastern Libya, with the exception of Derna, and parts of the south. The Interim Government is linked with the House of Representatives and the LNA.

Key Concerns Regarding the Current Fighting in Derna

LNA troops operate checkpoints, severely restricting the ability of civilians to leave and enter the city. The siege is causing a spike in food prices, with some foods increasingly scarce, the two Derna residents said. They also said trash is building up in various areas, stemming from restrictions on bringing fuel into the city that municipal authorities need to provide adequate sanitation services.

The LNA and other forces who support them, including the Egyptian government, have conducted air strikes against the armed group’s targets since 2014, causing civilian deaths and damage to civilian infrastructure. Airstrikes by unidentified forces on October 30, 2017, killed 16 civilians, including 12 children. There was no claim of responsibility and no investigation by Libyan or other authorities.

Parties to the conflict should presume anyone leaving an area of conflict to be a civilian unless there is evidence to the contrary. Any screening process should be limited to hours, not days or weeks, and only agencies or personnel with a screening mandate should be allowed to carry out such activities. Anyone held for more than a few hours should be treated as a detainee and given all the rights that detainees are entitled to under Libyan and international law.

Children suspected of being recruited and used by militant groups to commit acts that violated international law should be treated primarily as victims, not criminals, with a view to their rehabilitation and reintegration, not punishment, and authorities should seek alternatives to subjecting children to judicial procedures. Screening and detaining authorities should not presume affiliation to a militant group based solely on a person’s gender, age, family, or tribal affiliation.

Screening and Treatment of Detainees

The prison system in Libya, run by various authorities, is characterized by systematic abuses across the country, and the criminal justice system is dysfunctional in most areas. Detaining authorities should promptly provide detainees with all protections and due process rights under Libyan and international law. Authorities should ensure that anyone detained is held in humane conditions in a recognized detention center accessible to independent monitors and is treated with dignity and respect.

Anyone detained, including in conjunction with the conflict in Derna, should have a judicial review of the legality of their detention. Authorities should only detain children as a last resort and for the shortest appropriate period, in keeping with international law. Commanders and prison authorities should communicate clearly to forces under their command that torture and ill-treatment are prohibited. Detaining authorities should also make public the number of fighters and civilians killed or detained as a result of the hostilities.

Since 2016, Human Rights Watch has documented a series of extrajudicial killings that included civilians and summary executions of detained fighters, most in eastern Libya, but also in Tripoli and in the southern region. In January 2018, a commander of the LNA wanted by the International Criminal Court since 2017 for war crimes summarily executed 10 people apparently in retaliation for a mosque bombing that resulted in deaths. The LNA did not hold anyone responsible for these crimes and has refused to surrender the commander, Mahmoud al-Werfalli, to the ICC.

International law prohibits the extrajudicial killing of civilians and of fighters who have surrendered and no longer pose a threat.

Armed hostilities in Derna could lead to mass displacement of civilians, which carries the risk of people not being allowed to return to their homes. LNA members and affiliates have since 2014 prevented thousands of families from returning  home, accusing them of “supporting terrorism.”

The authorities should ensure that civilians who are forcibly displaced are able to go home safely and are protected from reprisals.

International humanitarian law, or the laws of war, apply to all sides in the fighting in Libya, including armed groups, Human Rights Watch said. Senior military and civilian commanders of the forces on all sides who do not act resolutely to stop gross human rights violations in areas under their control, and who fail to hold those responsible to account, risk domestic or international criminal prosecution for complicity in war crimes.

Serious violations of the laws of war, when committed with criminal intent, are war crimes. Those who commit, order, assist, or have command responsibility for war crimes are subject to prosecution by domestic courts or the International Criminal Court. The ICC has jurisdiction over war crimes, crimes against humanity, and genocide committed in Libya since February 15, 2011, under UN Security Council resolution 1970.