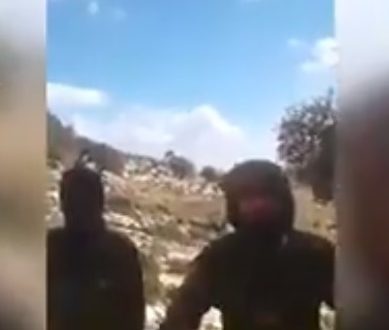 A fighter from the ranks of Khalifa Haftar’s self-styled army has threatened to behead and kill Derna people and demolish their houses, in the latest appalling threats by radicals-dominated army.

In a video circulated on social media pages, the gunman said they will treat Derna people with slaughter as the “Khawarij” did in Sahaba Mosque, in reference to the beheading of a local man from Derna by ISIS in 2015 before being defeated by the city’s Shura Council.

“We will demolish your houses; we will kill everyone, even civilians, we don’t need Derna anymore.” The gunman threatened.

He also vowed to take revenge for “the martyrs,” threatening to treat Derna people worse than they (army) treat the “Khawarij.”

Dignity Operation has launched a new military operation to invade Derna and take it from what it called “the terrorist groups controlling the city.”

The city has been under siege by Dignity Operation for more than a year, preventing food, fuel and medical supplies to flow to the city.

The Derna Protection Force (DPF) said Wednesday it repelled an attempt by Dignity Operation armed groups to advance into south of the city.