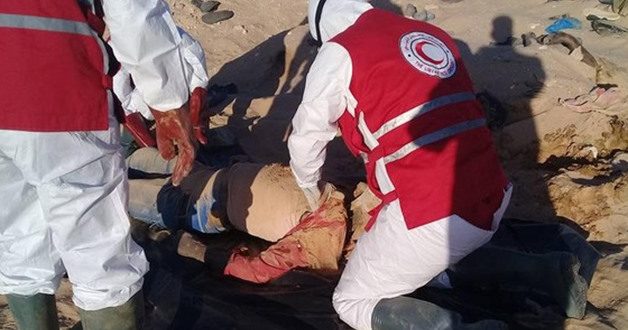 The Libyan Red Crescent refuted claims say that it had found 116 Egyptian bodies buried in a desert area, east Libya.

Several News outlets mistakenly reported that the bodies are of illegal immigrants, adding that they found their IDs and other personal belongings also buried with them. The claims came only a few days after Egypt has received the bodies of 20 Egyptian Christians beheaded in Libya by the Islamic State terrorist group (ISIS) in 2015.

The Egyptian authorities always coordinate with their Libyan counterparts in such cases to return the bodies to their relatives.

The 116 victims were said to be among many Egyptians who risked their lives to find work in the lawless chaos of Libya following the downfall of Muammar Gaddafi in 2011 and civil war.

Since the ouster of Libyan long-time leader Ghaddafi, the war-torn country draws wide international and regional attention, causing a serious threat on the national security of North Africa and Europe.

Libya, which is struggling to get through the critical political situation that it has been experiencing since 2011, is not only trying to unify its army, but is longing to revive its political functions by conducting presidential and legislative elections.

Egypt has hosted several meetings to bring the Libyan conflicted factions to the negotiations table to resolve the Libyan crisis and amend the Skhirat agreement, which aims at ending Libya’s civil war.

The major obstacle in the face of any international or Arab participation in ending the crisis in Libya is the lack of a Libyan partner that would support any involvement. Since 2014, there are two major factions on the ground, one led by Haftar, commander of the Libyan National Army, who now controls the eastern side of Libya and works in cooperation with the government of the House of Representatives, known as the Tobruk government. The other is led by Fayez al-Sarraj, head of the UN-backed Libyan Government of National Accord.

Therefore, there is no official side recognized by all parties in Libya, but there are two opposing factions, roughly equivalent in terms of power, competing for legitimacy. Nonetheless, neither side appears to be able to tip the scales of this conflict in its favor.

Policymakers in Egypt believe that Libya should have a unified body representing all sides in the war-torn country. However, this requires the elimination of terrorist groups that are plaguing the country and standing in the way of any regional or international attempt for reconciliation.

The Egyptian state is aware that any intervention in Libyan affairs will enrage the Libyan people due to religious and national sensitivities.

Therefore, Egypt called for a meeting in August 2014 to discuss the formation of a coalition force with the United States and other Arab nations. The final recommendation of the meeting, held in Cairo, did not suggest the formation of any Arab or international military intervention in Libya, but it called for the immediate cessation of all armed operations in order to support the political process in Libya.

In December 2015, the Skhirat Agreement was signed by major parties in the Libyan conflict under the supervision of UN envoy Martin Kobler in the city of Skhirat, Morocco. The agreement recommends a peaceful transition of power and the establishment of a national unity government. However, the agreement failed to achieve the desired stability on the ground because it lacked consensus.

Egypt’s officials held several meetings with their Libyan counterparts as well as members in Tobruk’s House of Representatives to resolve the Libyan crisis and amend the Skhirat agreement.

In December 2016, Cairo hosted a conference attended by Libyan officials and representatives from the country’s numerous factions, where they issued five proposed amendments to the agreement. The conference concluded with a decision to amend the eighth article of the Skhirat agreement that outlined the jurisdiction of the Libyan army chief commander.

Negotiations to unify the Libyan military were held as a part of Egypt’s initiative that kicked off in July 2017 to unify the military institutions. The first meeting aimed at creating a framework for the initiative while the second and third meetings were held in Cairo from Oct. 29 to Nov. 2, 2017, to follow up on the results of the first meeting.

The fourth meeting was held from Dec. 6 to 9 to restructure the Libyan army.

The sixth round of the negotiation on the unification of the Libyan military establishment was held on March 23 in Cairo.

In a press release issued at the conclusion of the meeting, the Libyan factions convening in Cairo agreed to resume with their talks in an attempt to complete the establishment of the four technical committees that the Libyan factions agreed on forming during the previous rounds of talks as an initial step towards the consolidation of the military establishment of Libya.

The meeting also concluded with reaffirming the participant’s keenness to move ahead with unifying the Libyan army whose top priority is to maintain and preserve Libya’s national security and peace and stand firm against foreign interferences.

Members of the Security Council welcomed recent efforts to strengthen an inclusive political dialogue among all Libyans, supported by Libya’s neighbors, international partners and regional organizations within the framework of the Libyan Political Agreement endorsed by UN Security Council Resolution 2259.