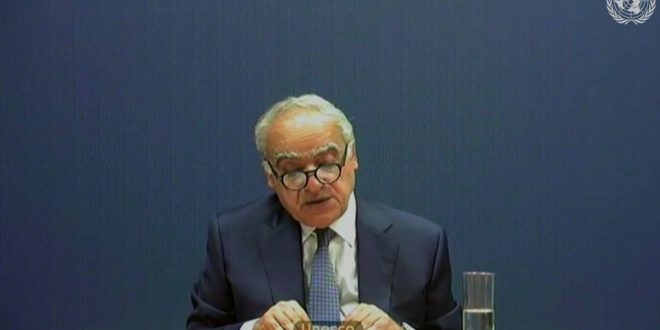 Salame said on Monday via video conference from Paris that Derna in eastern Libya has been subject to escalating ground, air and artillery assault since May 07, when Khalifa Haftar announced an offensive by what he called “the Libyan National Army,” adding that numerous civilians have been killed, while aid and medical access has been severely limited.

“The UNSMIL urgently call on all parties to exercise restraint and to take all feasible precautions to protect civilians, and I strongly advise that the Council does likewise. The UN is working hard to address the humanitarian situation and is preparing in case the conflict worsens, and requests all actors permit unfettered humanitarian access and safe passage for civilians out of the area.” Salame told the UN Security Council.

Salame also said Sabha has also suffered an alarming escalation in armed clashes, pointing out that fighting for control of strategic locations has led to rising fatalities, including many civilian casualties.

Meanwhile, other UNSC members including UK, US, France and Sweden also voiced concern over the Derna siege and military escalation, calling for allowing civilians to have the necessary basic services such as foods and medicines.

The members also said they support the call for elections by the end of this year in Libya in line with the UN action plan proposed by Salame, saying there should be cooperation among Libyan parties to finish the issue of the constitution referendum and thus issue elections law to regulate the upcoming democratic process.

“On the current draft of the Constitution, Libyan views dramatically diverge. While many are keen to proceed directly to a referendum, others are dissatisfied with the text and call for its amendment, a return to a previous constitution, or specific guarantees, insisting that otherwise they will strongly oppose the organization of the referendum.” Salame told he UNSC, urging the House of Representatives in Tobruk to do its bit.