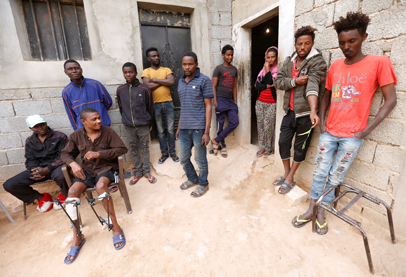 The UN Security Council is considering imposing the first-ever sanctions on people smugglers in Libya, targeting six leaders of trafficking rings, but Russia has requested more information, documents obtained by AFP on Monday showed.US Ambassador Nikki Haley told a council meeting on Libya that “there is strong regional support for these designations and the evidence showing the involvement of the six people is clear.”

“Failing to move forward would be a travesty,” she added.

Presented by the Netherlands, the proposed sanctions blacklist includes two Eritrean nationals described as top operators in transnational smuggling networks and four Libyans including a the head of a regional coast guard unit.

The six individuals would face a global travel ban and assets freeze if the council agrees to blacklist them. France, Germany, Britain and the United States support the Dutch sanctions request.

Russia however told the council’s sanctions committee that “we need more information to better understand the value of the said proposal, how efficient it might be if approved”, according to a letter obtained by AFP.

Russia called for a committee meeting to examine the evidence on the involvement of the six individuals and noted that the criminal networks “stretch to many European countries and the United States.”

The sanctions blacklist was presented on May 1 and Russia put a hold on the request a week later.

Smuggling of tens of thousands of migrants

Libya has long been a transit hub  for refugees and migrants, but smugglers have stepped up their lucrative business in the years that followed the 2011 ouster of Moamer Ghaddafi.

The fate of migrants has come under UN scrutiny since film footage emerged last year of Africans auctioned off as slaves in Libya, drawing outrage from African governments.

Among the six on the proposed blacklist is Ermias Ghermay of Eritrea, described as a leader of a network responsible for “trafficking and smuggling tens of thousands of migrants” from the Horn of Africa to the coast of Libya and onwards to Europe and the United States, according to the sanctions request obtained by AFP.

Al-Milad was cited for running an operation in which he and other coast guard members would open fire on migrant boats, causing them to sink and would then pick up refugees at sea who were sent to detention centers and beaten, the documents said.

Ghermay and Abelrazak were cited for organising countless perilous journeys across the Mediterranean that ended in shipwrecks and for running private detention camps in Libya.

During the council meeting, Russian Deputy Ambassador Vladimir Safronkov did not specifically mention the sanctions request but said the migrant problem should be not be tackled with “half-measures.”